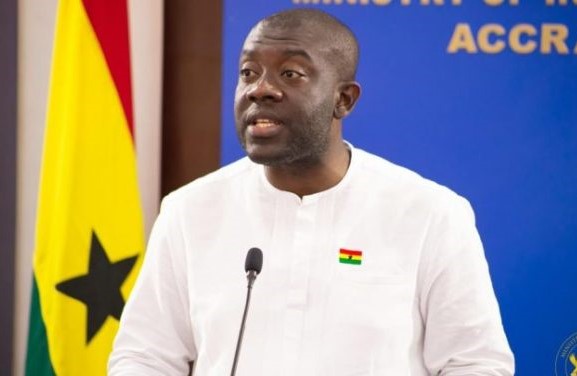 Information Minister Kojo Oppong Nkrumah has debunked alleged arrest of any government official with £26 million in the UK.
He added that it is also untrue that British authorities have intercepted a haul of cash from Ghana to the UK.
Speaking on Takoradi-based Skyy Power FM on Monday, the Minister accused the National Democratic Congress (NDC) of fabricating the news as part of their planned propaganda ahead of the December polls.
According to him, as the country draws closer to the December polls, the opposition NDC will deploy all manner of propaganda tools in a desperate bid to sway voters pointing to the substantive matter as one of such propaganda techniques.
“It is a total fabrication and we are clear in our minds that it is a fabrication by the NDC and it is part of their strategy for these last eight weeks where they will churning out a lot of fabrication, lies and fake audiotapes.
“We are clear in our minds that it is the NDC for one or two reasons. The first person to articulate it publicly is Inusah Fusieni, NDC MP for Tamale Central.
“They are the ones who are championing it and articulating it on their online media platforms including Radio Gold online. And now you can also find that there is a fake audiotape that purports to be a piece of international news broadcast on it which is being circulated since last night,” he said.
He said the strategy is similar to the one deployed by the NDC weeks before the 2008 general elections and has been part of their propaganda architecture, especially in election years.
However, the Minister called on the media and the general public to ignore such fabrication and most importantly be on the lookout for similar concoction in the future from the NDC as the two major political parties in the country battle for votes.
“We are calling on first of all the media and the general Ghanaian public to not fall for these fabrications and fake doctored or cooked up tapes that they are going to be churning out in the next eight weeks as we get ready for the elections,” he added.

‘There’s no evidence of money laundering in Ghana’ – EU