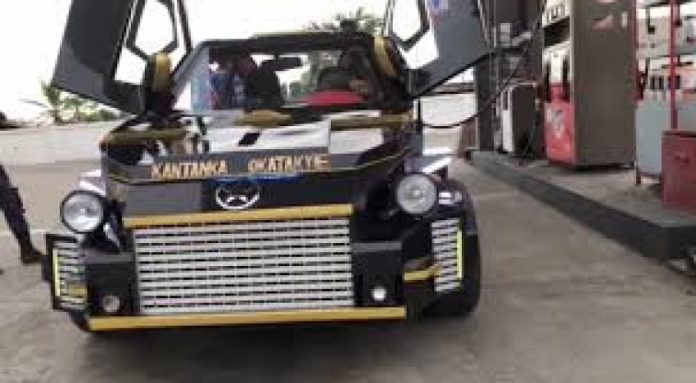 The company has also been given a duty free deal when they import the materials for assembling and manufacturing purposes.
It was announced by the CEO of Kantanka Group of Companies Nana Kwadjo Safo Ankofena Jnr at the end of year party and awards ceremony held at his residence in Kwabenya on 6th January 2019.
The Chief Executive officer (CEO) in August 2018 disclosed in an exclusive interview with Rainbow Radio 87.5Fm that, government takes import duties on Kantanka cars produced in the country.
The CEO told host of Frontline Kwame Tutu that aside the import duties on materials imported, they pay for import duties, a situation he lamented is having a negative on their activities.
He was reacting to concerns raised by prospective buyers of Kantanka range of vehicles that there expensive.

In explaining the rationale behind their pricing, the businessman and pilot told the host that, government charges import duties on every single brand of vehicles manufactured in Ghana just like other cars imported into the country through our ports.

The reduction in taxes and import duties he indicated will reduce the prices for their range of vehicles by an amount of GHc20, 000.

“I know customers have raised concerns about our prices. Our saloon car for example is sold at GHc140, 000. If I had my way, I would not have sold the car for GHc140, 000. But we live in a country where you are taxed on everything you import. Aside this, government takes import duties on Kantanka cars as if you have imported the cars from other countries.

They calculate the components in the car and charge you as if you imported it. We are paying GHc20, 000 on each car manufactured in Ghana,’’ he lamented.

“This is why we have called for a policy. There is no existing policy that would exempt manufacturers of vehicles in Ghana from import duties,” he lamented.

He has also advocated for a policy that will support the industry. Support for local vehicle manufactures he added would create jobs, enhance economic activates through tax incentives among others.