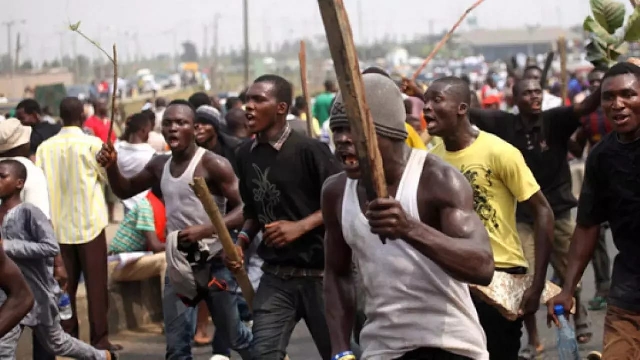 Some residents of Amanase in the Eastern Region, have attempted torching a shrine belonging to a traditional priestess who has been linked to the recent killing of an 11-year-old boy by two teenagers in Kasoa, Central Region, for ritual purposes.

The intervention of the police in Suhum foiled the arson attempt.

The angry residents, mostly made up of the youth, were led by the regent of Amanase.

They massed up at the shrine on Friday, 9 April 2021 in anger following the arrest of the priestess and another accomplice in the area on Wednesday.

The regent, Osabarima Obengfo Addo Agyekum, issued a three-day ultimatum to the Inspector-General of Police to furnish them with updates of the arrests made.

“It is only now that we’ve understood the gravity of their activities to the extent of taking a life in the name of giving money to the youth for that matter”, he said.

The late Ishmael Mensah, a Class four pupil, was buried on Thursday, 8 April 2021, in accordance with Islamic tenets.

The two teenage suspects, Felix Nyarko and Nicholas Kini, have been remanded in police custody after appearing in court.

They confessed to having had the inspiration to commit the crime after watching a money ritualist advertise on TV.

Following that revelation, the Ghana Pentecostal and Charismatic Council (GPCC), in a statement issued on behalf of its National Executive Council by General Secretary Rev. Emmanuel Teimah Barrigah, noted “with concern, the confession of the culprits that they were enticed by an advert by a fetish priest on a TV station inviting viewers to bring human body parts for purposes of doubling money” and called on the Ghana Police Service “to search for and arrest the fetish priest for prosecution”.

The Council also appealed to “media houses not to make profit their sole aim but also consider the moral and cultural health of the nation in accepting adverts for their outfits”.

Additionally, the Council urged the National Communications Authority, the National Film Authority and other relevant state institutions “to review the current law on censorship of contents that can be broadcast on media platforms in order to tie any loose ends that permit media houses to broadcast any and every kind of content to any category of audience at any time”.

Lastly, the Council appealed “to parents to take up their parental responsibilities in advising their children to stay away from deviant behaviour that border on criminality and also admonish our youth to know that the only way to lasting and unattached wealth is hard work”.