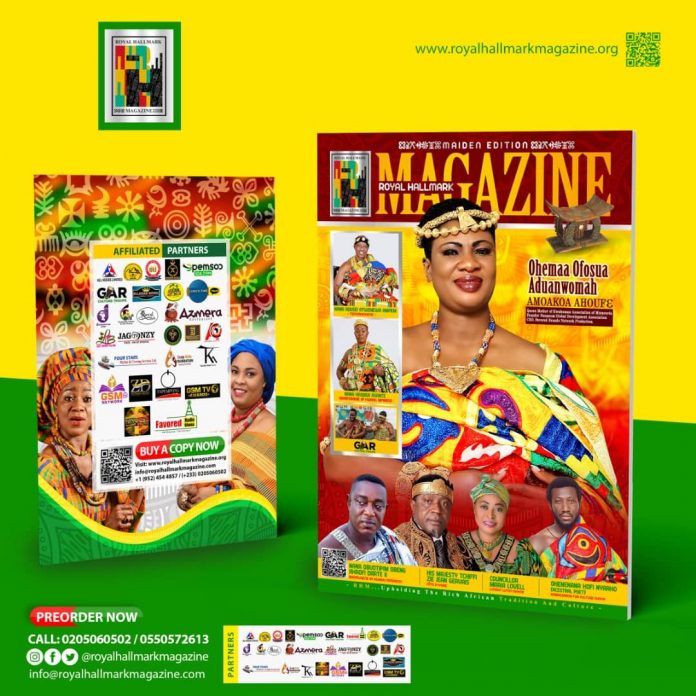 The maiden edition of Royal Hallmark Magazine, a brand under the Favoured Brands Network Production will be launched on August 21, this year at the Kumasi Cultural Centre in the Ashanti Region.

The Royal Hallmark Magazine is a dedicated African magazine that is purely focused on projecting African and especially Ghanaian culture and tradition to the world.

The magazine seeks to champion the plan of supporting and uplifting and portraying the vibrant African tradition and culture to the World as well as promoting personalities who have been pacesetters of Ghana’s culture over the years.

The 60-page magazine would feature dynamic and influential traditional leaders from the continent and diaspora, cultural Ambassadors, traditional dancers and groups, high-life and gospel musicians, and as well feature exclusives topics.

Some names to be featured in the first edition is one of Africa’s Great Kings, His Majesty Tchiffi Zie Jean Gervais from the Ivory Coast, Prof. Frederick Owusu Nyarko (Pd. D), Ambassador for Culture Ghana among others.

Ohemaa Ofousa Aduanwomah Amoakoa Ahoufe, Kwahumanhemaa (Queen Mother) of Minnesota, Chief Executive Officer (CEO) of the Favoured Brands Network Production, speaking to the Ghana News Agency in an interview from her United States base said Africa and for that matter, Ghana has a unique culture worth showcasing to the world.

She said for a very long time, Africa as a continent has not been able to market its culture and tradition to the world and therefore have not been able to command the needed respect, which she believes the outdooring of the magazine will be the turning point.

“I’m hopeful Royal Hallmark Magazine would spearhead the agenda of promoting African culture and tradition as well as educate various countries on the continent and the world about the several cultures that make Africans unique,’’ she said.

The magazine is targeted at creating awareness of the African culture among the youth and position their minds to believe and have confidence in the culture, God has given the continent.

The launch is expected to bring together Chiefs and traditional rulers from all parts of the country and promises to be spectacular.

Organisers said Ashanti Region being the hub of Ghana’s culture, promises to deliver something extraordinary to outdoor, the only magazine that highlights African culture and tradition, leaders and stakeholders in the industry.

There would be performances from young Ghanaian poet, Ink Weaver, while WESCO cultural Group from the Wesley College of Education will also entertain the audience with some cultural dances with other surprises to be unveiled on the day.