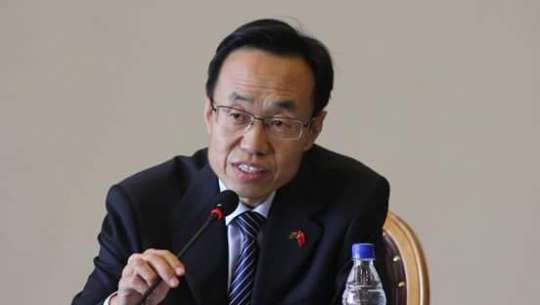 The Chinese government has condemned the Uygur Human Rights Policy Act of 2019 passed by the United States House of Representatives.

According to China, measures adopted in Xinjiang Provence with respect to counter-terrorism and de-radicalization are no different from those adopted in many other countries around the world, including the US.

Chinese Ambassador to Ghana, H.E. Shi Ting Wang, who addressed a press conference Wednesday, January 8, 2020, warned the United States to discard its ideological prejudice and stop the double standard it has adopted on counter-terrorism and de-radicalization.

The US, he said, is putting itself in a position opposed by 1.4 billion Chinese people, the international community as well as the justice conscience of humanity.

“No force can stop Xinjiang’s progress of stable and prosperous development, as well as its people of all ethnic groups from working together and forging ahead,” he stated.

According to him,” over a past period of time, the region faced challenges posed by frequent violent terrorist activities, severely damaging people’s right to subsistence and development.

China, he stressed, has upheld the socialist rule of law, giving equal importance to cracking down violent terrorist crimes in accordance with the law and addressing problems at the source.

He averred that Xinjiang has been intensifying efforts to fight against terrorism and extremism through improving people’s wellbeing, enhancing legal publicity and education, and establishing vocational education and training centers,

These important aspects, he said, have laid a solid foundation for realizing Xinjiang’s social stability and long-term security.

“There have been no violent terrorist cases and incidents for three consecutive years in Xinjiang.” “The spread of extremism has been effectively contained, public security has notably improved, and people of all ethnic groups are able to live and work in peace with a much stronger sense of gain, happiness and security,” he stated.

He added that China is committed to the strategic goal of pursuing high-quality economic development, upholding an innovative, coordinated, green, open and shared development philosophy, and seeking progress while maintaining stability in Xanjiang.

He noted that the region has not witnessed any terrorist attack for the past three years, which has boosted its economy with an annual GDP of 8.5%

According to him, in 2018, Xinjiang received 150 million tourists from home and abroad demonstrating the province is safe contrary to claims of the US.