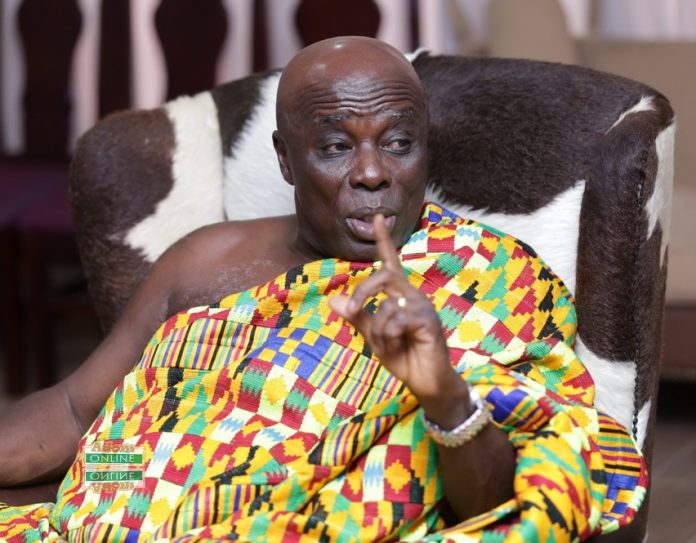 Addressing the Eastern Regional Minister and his entourage who paid a courtesy call on the Ofori Panin palace during the weekend, Okyenhene Osagyefuo Amoatia Ofori Panin minced no words describing Community Mining Policy as “Uncle or Senior brother of galamsey”.

According to him, the policy is illegal and causes destruction to lands and water bodies in the Akyem area.

The Community Mining Programme is aimed at formalizing mining in selected communities across the country.

With at least one community mine expected to be set up in each of the mining districts in the country, the community mines are estimated to provide employment for more than 4,500 miners that were trained by Government at the University of Mines and Technology (UMaT), Tarkwa.

Launching the pilot programme at Wassa Akropong, President Akufo-Addo stated that the Community Mining Programme will ensure that “mining will be done the right way, within the tenets of the law, and will not destroy our natural resources”.

The Policy has since received lots of criticism by environmental watchers who say it is causing more harm than good.

“They are destroying lands and rivers. The last time the Minister of Lands and Natural resources came here, I told him point-blank that, they shouldn’t deceive us with Community mining, It will end nowhere. Community mining is like an uncle or Senior brother of galamsey. They degrade lands and pollute river bodies just as galamsey.
There is no accountability, no reclamation. But they say it is government policy. We will not allow this to continue because when the rivers are destroyed [Minister ] they don’t blame the MCE rather the Okyenhene because the lands belong to me,” the Okyehene stated.

He continued, ” I have Personally told the President, I also had the opportunity yesterday to speak to the Finance Minister. I will also speak to Abu Jinapor. Enough is enough. We will not allow community mining to go on here. We will not allow it. It is not doing any good to anyone, not even the government. River bodies, lands and forest should not be destroyed under NPP government. We need to put an end to it. We must stop it now.

Osagyefuo Amoatia Ofori Panin lamented the invasion of Kyebi by illegal migrants engaging in illegal mining in the area.

“Now Nigeriens come in truckloads of vehicles to engage in illegal mining here. But we (traditional council) don’t have policy, we don’t have ammunition to stop them. When you ask immigration how they arrived they don’t give us any better answers. Kyebi is full of illegal aliens who are engaged in illegal activities. MCE is not able to do anything about it, we the traditional council can’t also do anything about it so if government is also not doing anything about it then we are doomed. We have spoken and spoken about this but nothing has been done. I went there with my chiefs to drive them away”