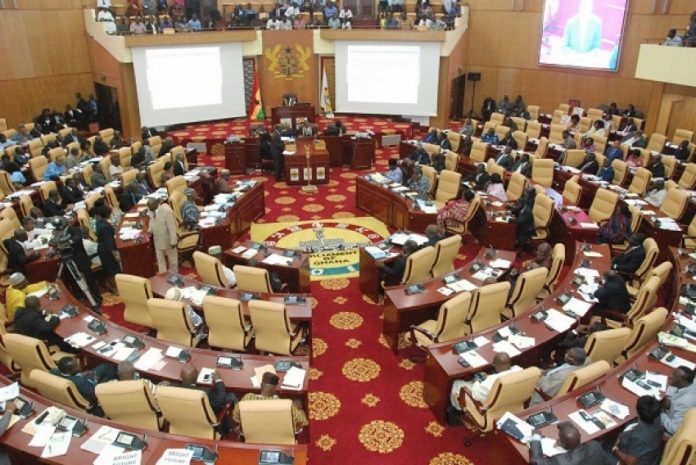 This became possible when the House in consensus adopted the report of the Joint Committee on Finance and Mines & Energy on the concession agreement between the Government of the Republic of Ghana and the Consortium of Investors led by the Manila Electric Company (MERALCO) for private sector participation in the ECG within the terms of the Second Millennium Challenge Compact.

The adoption of the joint committee’s report was characterized with diverse views from the Majority and Minority Members of Parliament (MPs).
Presenting the joint committee’s report on the floor of Parliament, Tuesday, July 24, 2018, the Chairman of the Committee on Mines & Energy, Hon. Emmanuel K. Gyamfi told Members that the Committee is hopeful that the private sector participation in the ECG by means of a concession would help to turn around the fortunes of the utility service provider and return the company to financial and operational viability.
The deal, he noted, is advantageous to the government partly because the Concessionaire is responsible for all major new investments that will help to minimize the impacts of such investments on the national budget.
Hon. Gyamfi further told Members that the Concessionaire will take responsibility for the delivery and operation of ECG’s power distribution and services infrastructure, thereby, transferring the inherent risks from Government to the Concessionaire.
The goal of the Millennium Challenge Compact is to reduce poverty through economic growth in Ghana. The objectives of the Programme are:
– to increase private sector investment and the productivity and profitability of micro, small, medium and large scale businesses,
– increase employment opportunities for men and women and raise earning potential from self-employment and,
– improved social outcomes for men and women.

Lease and Assignment Agreement
According to the report, the concession agreement comprises three different sub agreements: lease and assignment agreement, bulk supply agreement and government consent and support agreement.
The Lease and Assignment Agreement (LAA) between the ECG and the Concessionaire is the primary document governing the 20-year relationship between ECG and the Concessionaire with regards to ECG’s Distribution system. It also protects the interest and rights of the current staff of ECG.
Furthermore, the report also indicates that the Concessionaire would be required under the Agreement to inject an amount of US$580m in the Distribution System during the first five years of the agreement period.

Government Support Agreement
With this, the government is providing a sovereign guarantee to indemnify the Concessionaire for any substantial breach by ECG of the terms and conditions under the Lease and Assignment Agreement and the Bulk Supply Agreement. The areas where the sovereign guarantee is being provided include payment of electricity bills supplied to Ministries, Departments and Agencies (MDA) and Buy-Out Price after the expiration of the 20-year concession period.
The agreement makes special arrangement for the supply and payment for electricity to Strategic Facilities of Government.

Technical and Commercial losses
The ECG, according to the report, experienced approximately 23% aggregate Technical and Commercial losses in 2017. This percentage loss is expected to be reduced significantly per the agreement.
But the Ranking Member of the Mines & Energy, Adam Mutawakilu, commenting on the deal told the House that per the agreement, the Millennium Challenge Compact is expected to release US$190.2million in addition to US$124.299million that will be released by the Concessionaire to turnaround the fortunes of the ECG for the first year.
The amount, he noted, will do little in reducing the technical and commercial losses of the ECG. This, he noted, does not augur well for the company as far as the agreement is concerned.

Assets of ECG
MP for Yapei/Kusawgu and former deputy Minister for Power, Hon. John Abdulai Jinapor also commenting on the deal said he is much concerned about the value of assets of the state utility company as captured in the Minister’s accompanying memo to the House.
“Mr. Speaker, I have looked at the Minister’s memo where he states that ECG’s liability is US$ 7.6billion and that their current asset is US$ 5.5billion. I disagree with the Minister. I have in mind the audited financial statement of the ECG. As at end of 2014, their asset was about US$9.4billion. Subsequently, the asset has increased and so it cannot be possible that in the memo we will state that the current asset is only US$5.5billion. ECG is a huge company and it is important that we pay particular attention to that”, he noted.

Local content
Chairman of the Finance Committee and MP for New Juaben South, Dr. Mark Assibey-Yeboah told the House to applaud the negotiating skills of the Minister and his group for negotiating the deal to have 51% local participation in the deal.
He said per the details of the original agreement as entered into by the previous agreement, 80% of the deal would have been given to foreign participation with only 20% going to local participation.
“Mr. Speaker, what is also assuring is the assurance of conditions of ECG staff. Workers will not be laid off and we must also applaud those who negotiated this deal”, he noted.
The Minister for Energy, Boakye Agyarko, on his part informed the House that as part of the government restructuring process in power sector institutions, arrangement is being made for ECG to be custodian of all PPAs in the country.
He also indicated that the current arrangement makes it quite difficult to dedicate certain cheaper hydro sources of energy to power critical industries such as the refinery and smelting in the aluminum industry.
In this regard, the current PPAs held by Volta River Authority would be transferred to ECG.