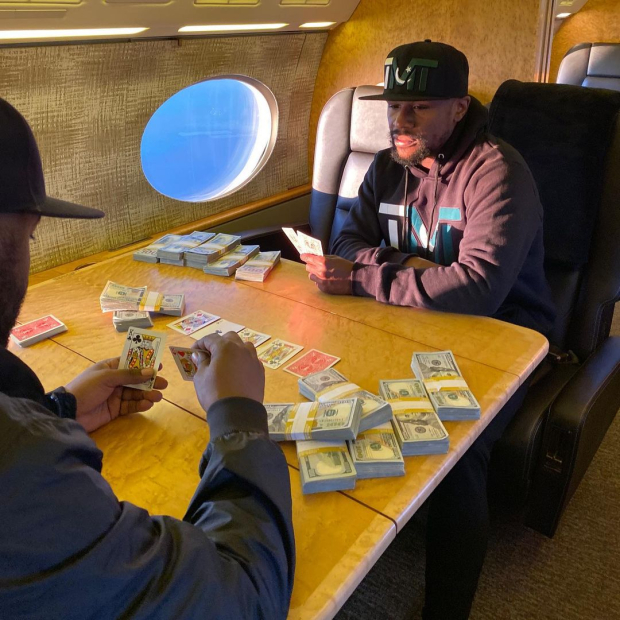 Floyd Mayweather has earned a life of luxury as one of the greatest – and most box office – boxers in history.

And he certainly lives up to his ‘Money’ nickname when travelling, leaving no stone unturned in living the high life.

Naturally the American, who is believed to be worth around £510million, does his fair share of travelling, and to do so, he has the perfect means of transportation.

Mayweather, 44, owns a plush £43.5million private jet, that has taken him to destinations including Monte Carlo, Hong Kong, Bali, Fiji and Tokyo, among many others.

And true to form, not a penny has been spared in making his frequent journeys as comfortable as possible.

The Gulfstream G650 jet, dubbed Air Mayweather, has glorious interior features including luxurious leather seats and even a bed for him to get some rest.

Also on board is an in-built entertainment system, so that there’s not a boring moment in transit.

While perched on one of the leather seats, Mayweather has been known to have a nice trim, or even a rub down, having brought a masseuse aboard on a recent trip.

Far from the conditions of a stuffy commercial flight, fresh air is pumped into the aircraft every two minutes, keeping Floyd in perfect nick.

Air Mayweather features a satellite phone, a rarity even for luxurious private planes, in case he needs to make a call while cruising thousands of feet above the ground.

Floyd has engaged in some high-stakes poker games aboard his jet.

And he loves to show off his beloved aircraft on social media.

The plane’s exterior has his name planted across the side, while the letters ‘TBE’ are also visible, standing for ‘The Best Ever’.

Mayweather had been set to face YouTuber Logan Paul in an odd boxing match-up on February 20.

But the bout was delayed, with no new date or venue announced.

Wherever it takes place, getting there won’t be a problem for Mayweather.