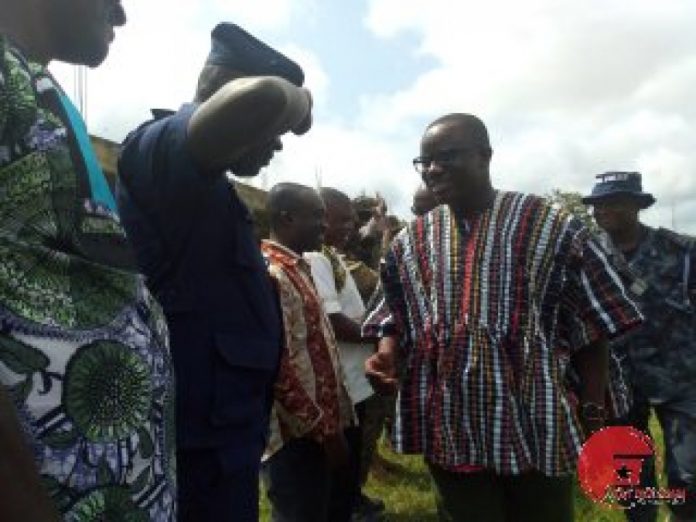 Out of the total, 28 were Chinese nationals, 1 Burkinabe and 1 Nigerien, with the rest being citizens of Ghana.

Total operations conducted so far at the time of filing this report was 70, out of which 23 equipment (Excavators) had been seized.

This was revealed when Dominic Nitiwul and Ambrose Dery, ministers for Defence and Interior respectively paid a one-day working visit to the operation camps in the three regions.

The National Commander of the Operations Vangaurd Joint Taskforce, Col. William Agyepong said the Taskforce face some challenges which if not resolved would distract them from their successes.

According to the Col. Agyapong, the Taskforce would no longer burn any equipment but would send them to the appropriate quarters in accordance with the law. Though 6 excavators had been burnt already, 24 were voluntarily withdrawn from the mining sites by the owners.

He elaborated challenges facing the Taskforce which included inadequate transport to support operations and administration, the challenge of hauling seized equipment to holding areas.

The Commander, appealed to the Ministers to help lobby the Attorney General to fast track the conviction process, indicating that it would be a plus to their cause.

He asked for more vehicles to make the operation move on smoothly since the 25 given to them were not enough to aid their movements on the field.

Col. Agyepong noted in his briefing notes to the ministers and the media that, the Taskforce had achieved in just one month, what was to be achieved in 3 months, “and this shows that we are on track and will achieve the aim of being here if all the necessary apparatus are provided”, he added.

On his part, the Minister for Defense, Dominc Nitiwul thanked the Taskforce for their selfless dedication to the country, by way of protecting the resources and lands for the future generations.

He expressed his gratitude to the work done so far, whilst assuring them of Government’s unflinching support.

The Minister was happy and commended the Taskforce for halting galamsey activities in these regions if not all, and urged them not to relent on the task until all phase in the fight were met.

He however gave donation of GH₵10,000.00 each to the 3 FOBs. He further announced that another team from the marine or the Navy will come on board to help in the water areas where the taskforce needs to go beyond water bodies to apprehend their culprits.

The Operations Vangaurd Joint Taskforce has its headquarters at Obuasi in the Ashanti region.