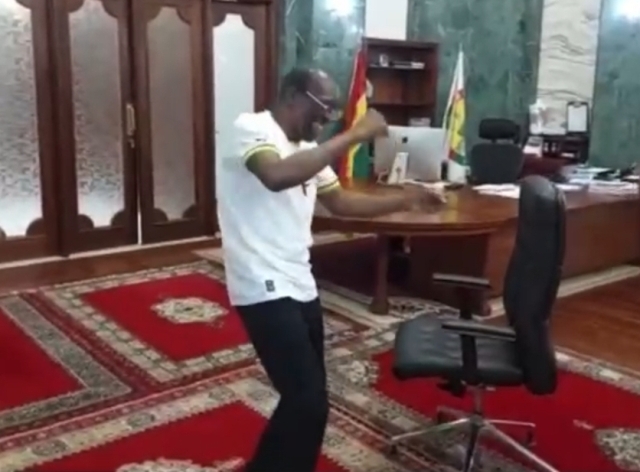 The Speaker was pictured during the game quietly observing proceedings in his kaftan and hat, surely praying for a win as the Stars soak up pressure from the Koreans.

The game could not end quickly enough after Ghana grabbed the third goal and the Speaker responded accordingly by going for his beloved Black Stars replica Jersey.

When the referee whistled to signal the end of the match, Speaker Bagbin could not hold back and ‘ran unto the field’ to join the celebrating players and Ghanaian soccer fans, widely punching the air with his fist.

South Korea had all the early pressure, forcing seven corners in the first 20 minutes, but it was Mohammed Salisu who gave the Black Stars the lead against the run of play after a goalmouth scramble.

Kudus doubled the advantage in the 34th minute with a precision glancing header after a beautifully delivered Jordan Ayew cross from the left-hand side.

Cho Gue Song scored two quick-fire headers to bring South Korea back on level terms around the hour-mark before Kudus added his second of the game in the 68th minute with a well-taken finish to make it 3-2.

Salisu cleared off the line late on to ensure the Black Stars came away from the Education City Stadium with all three points, keeping Ghana’s hopes of qualifying for the knockout stages well and truly alive.

The Stars’ first win of the tournament means Ghana is in control of their own destiny in terms of qualifying for the knockout stages heading into the last match against Uruguay on Friday.

South Korea can still qualify for the knockout stages but will need to beat Portugal in their last group game on Friday.