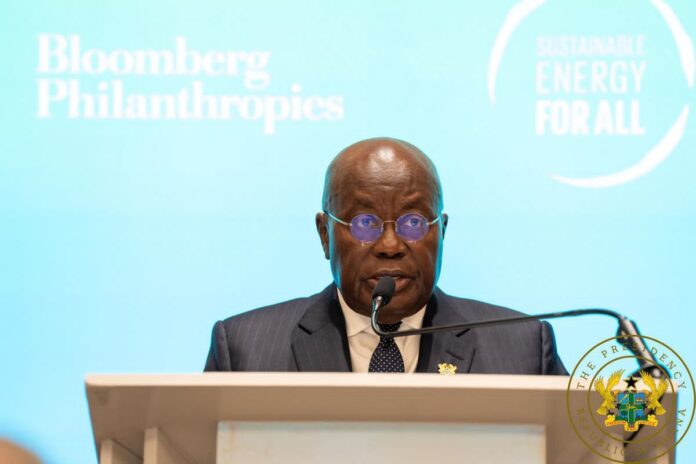 President Nana Addo Dankwa Akufo-Addo presented Ghana’s frame work on energy transition at a High-Level Event organised by Bloomberg Philanthropies on Sustainable Energy for All, on the sidelines of COP27 in Sharm el-Sheikh, Egypt.

With Ghana being a signatory to the Paris Agreement and other international conventions, which require the country to reduce her carbon dioxide emission levels, he indicated that it has become imperative for Ghana to develop plans and strategies toward the creation of a net-zero energy sector, whilst aggressively pursuing the nation’s economic development.

President Akufo-Addo also stated that “we will continue to increase the share of renewable energy in our electricity generation mix, as well as explore the options of hydrogen gas and other clean energy sources to meet our energy needs”

According to President Akufo-Addo, “Energy transition has become a global responsibility for us all, especially in view of the impact of climate change, and the global energy crisis brought forth by the Russian invasion of Ukraine.”

“Our updated Nationally Determined Contributions, under the Paris Agreement, affirm the country’s resolve to address the impacts of climate change and build a resilient economy for our people”, he stressed.

President Akufo-Addo continued, “Ghana’s position on energy transition is to continue the responsible exploitation of our natural resources for our development and transition at our own pace. The Government of Ghana is mindful of the actions of the developed countries in relation to energy transition, and their effect on us.”

To this end, he told the gathering that it has thus, become necessary for the Government of Ghana to develop an Energy Transition Framework that will guide the country, as the entire world moves towards realizing net zero.

The President also said that the Government of Ghana, being mindful of the implications of such a framework and its implementation on the entire economy, directed the Committee to undertake extensive stakeholder consultations, in addition to expert input, to produce the National Energy Transition Framework to guide its transition to a net-zero economy by 2070 in a just and equitable manner, as well as minimise possible stranded assets and job losses in the oil and gas sector.

The total cost of the transition is estimated at five hundred and sixty-one billion dollars (US$561.8 billion), the President added.

President Akufo-Addo also addressed the High-Level Meeting on “Just Energy Transition”, where he indicated that Ghana has developed a National Energy Transition Framework to provide the vision and guidance for Ghana’s energy transition.

In preparing this framework, the President stated that all existing policies were considered and the programmes that are being implemented towards achieving Ghana’s Nationally Determined Contributions.

“Wide stakeholder consultations were held to ensure that the energy transition issues in various parts of the country were captured and addressed in the framework. These included organized and non-organized labour, market women, academia, Ministries, Departments and Agencies (MDAS), Metropolitan, Municipal and District Assemblies (MMDAs), Development Partners (DPs) and the international community,” he said.

He explained that the Framework provides the optimal and sustainable pathway for fuel supply security, diversified energy mix and cost-efficient electricity generation, with an estimated generation tariff of less than US$4.5cents per kilowatt hour to accelerate the socio-economic development of Ghana.

“Ghana aims to achieve universal access by 2024. The Energy Transition Framework will meet future electricity demand of 380 Terawatt-hours, with a corresponding installed capacity of 83 Giga-Watts. Ghana’s diversified energy mix will include 21 Gigawatts of renewable energy installed capacity, which will provide the opportunity to enjoy a greater share in the renewable energy carbon credit market,” he added.

President continued, “the transition will mitigate 200 million tons of carbon dioxide of Green House Gas emissions, minimising energy-related indoor air pollution and associated diseases. It is estimated that forty-eight thousand, two hundred and eighteen (48,218) premature deaths will be avoided annually due to the improvement in air quality, resulting from the impact of the transition.”