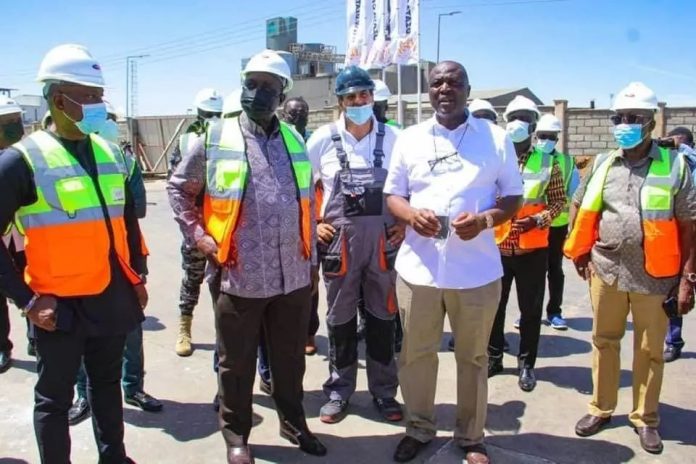 Minister of Trade and Industry, Mr Alan Kyerematen, has commended Mr Ibrahim Mahama, the Founder of Dzata Cement Limited, for investing heavily in the cement industry.

The over 100 million-dollar investment is located on a 10-acre land near the Tema Port.

Mr Kyeremanten offered the commendation when he paid a working visit to the plant of Dzata Cement Limited on Monday.

The visit was to enable him to have first-hand information on the cement-producing plant and the progress of work so far.

The technology deployed for producing the cement is from Germany and was developed by Haver and Boecker.

The cement grade produced by the plant is ordinary Portland cement, which is imported for the plant and then bagged.

The plant, which is wholly managed by Ghanaians, can produce an average of 120 bags per minute from the two production lines.

The Minister said the industry had been solely dominated by global foreign companies and that Dzata Cement Limited was the first wholly Ghanaian investment in the cement industry and that alone was remarkable.

He said the government very much appreciated the importance of foreign investment capital but there was no evidence of any country anywhere in the world that had been able to achieve quality growth without supporting their indigenous entrepreneurs.

“That is why l think this particular investment should pave the way for investments in industries which otherwise have been dominated only by foreign companies,” he added.

Mr Kyeremanten also lauded Mr Mahama for the investment in state-of-the-art technology, which also was important as a developing country.

He said as a safeguard measure to protect the domestic cement industry against import surges of Portland cement, the Export and Import (Restrictions on Importation of Portland Cement) Regulations, 2016 (L.I 2240) was passed.

The regulation requires every commercial importation of Portland cement from outside the ECOWAS region to be covered by permit or license from the Ministry.

Section (4.0) (a-d) of the Second Schedule of LI 2240 provides that an applicant for a permit to import Portland cement for re-bagging must provide evidence of elaborate plans to undertake Cement production in Ghana, including the state of the factory being constructed.

The Minister said the facility was going to create high skills jobs for Ghanaians and contribute to job creation.

He encouraged the management of the Company to as much as possible use local raw materials to create sustainable job opportunities for Ghanaians.

He urged the management to take advantage of opportunities the ECOWAS and AfCFTA markets offered to develop and grow the company while contributing to the Ghanaian economy.

Nana Philip Archer, Managing Director of Dzata Cement Limited, said the working environment was an eco-friendly one though it was a cement production factory.

He said phase I was a two-line re-bagging installed capacity of 1.2 million tonnes per annum using jumbo bags of imported bulk cement.

He said the production of Silos could hold 40, 000 metric tonnes of cement.

The Managing Director expressed gratitude to the Minister for the visit, even though they were yet to commence full operations.

The commencement of production by Dzata Cement will make it the 2nd bagging plant and the 12th plant in the industry and provide consumers with the additional choice of cement on the market.

Currently, there are eleven cement plants in production in the industry, excluding Dzata Cement.

They are nine grinding plants, one integrated plant (Savanah Diamonds), and one bagging plant (Dangote).