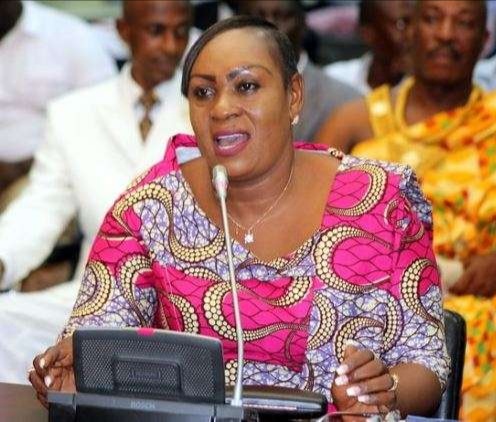 Minister for Fisheries and Aquaculture, Mavis Hawa Koomson, has appealed to Parliament to approve the 2022 Budget Statement for her ministry to be able to buy patrol boats to guard Ghanaian waters.

The Ministry, she said, has submitted a budget to government to purchase patrol boats, which has been approved by Cabinet, but stressed until the 2022 Budget is approved, the ministry cannot purchase the boats.

The Minister, also Member of Parliament for Awutu Senya East made the plea when she was answering questions on the floor of Parliament on Wednesday 8th December, 2021.

Member of Parliament for Ablekuma South, Alfred Okoe Vanderpure, on a follow up question, asked the Fisheries Minister what the ministry is doing to check the illegal fishing going on the Ghanaian Sea.
In her answer, the Fisheries minister said, “Mr. Speaker, the ministry has plans, which is in the 2022 Budget Statement to buy patrol boats to protect and guard the Ghanaian sea from foreign vessels who do not have permit and are fishing on our sea”.
She added, “There is also a Cabinet approval to purchase research vessel to strengthen visibility at sea and data collection for decision making and planning purposes.”

Earlier, the Member for Salaga South, Ms. Zuwera Mohammed Ibrahimah asked the Minister whether the Ministry is aware of general unavailability of premix fuel to artisanal fisher folks in the Salaga South Constituency, and if so, what are the ministry’s urgent plans to deal with the situation?

In response, the Minister for Fisheries and Aquaculture, Hawa Koomson said, the Ministry has not received such reports on shortage of premix fuel in the Salaga Constituency.

According to the Minister, this situation of availability of premix fuel across the country is due to some reforms introduced to deny unauthorized persons from assessing the subsidized product and diverting for other activities that normally creates shortage.

She quickly added, “We will, however direct the newly constituted National Premix Fuel Committee to investigate the report.”