Leadership of the New Patriotic Party (NPP) in the Ashanti Region led by its regional Chairman, Mr. Bernard Anwti Boasiako, has commended Deputy Ambassador to China, Dr. Charles Dwamena for his immense contribution to the party in the region.
A letter cited by frontpageghana.com and signed by Mr. Antwi Boasiako, popularly called Chairman Wuntumi partly reads, “I wish to bring to your notice that we have received the fifty (50) pieces of Megaphones and One Thousand, Five Hundred (1,500) nose masks you donated for the activities of the party.”
It continued, “I must emphasize that your donation could not have come at a better time, considering the fact that the party is expected to mobilize logistics and resources for the execution of the December 7 polls.”
“I write on behalf of the entire executives in the region to thank you for your kind gesture”.
Speaking on phone, Dr. Dwamena also known as Dr. ‘China’ said the COVID-19 pandemic has changed the face of political campaign, and this time, “We are not doing the open or mounting big platforms as we usually do, but it will be door-to-door and electoral area campaigns, and these are some of the logistics we will need.”
“So am supporting the party in the region with these megaphones, which will be needed to boost our campaign to maximize our gains and nose masks to protect ourselves as we embark on the campaign during this COVID-19 period”, he said.
According to the Deputy Ambassador, with all the infrastructure developments within the first three years in office, which is unprecedented, every member of the party must get to the ground to campaign for another term for Nana Addo to do more.

The items were presented by Nana Kyei, an opinion leader in Kwadaso, accompanied by Chairman Palance and Agya Osei, all former Constituency Chairman and Vice Chairman respectively.
In a related development, Dr. ‘China’ has taken upon himself to print 2,000 copies each of campaign posters for all the Parliamentary Candidates who would want it.
This is to also extend his kind gesture to reach all Parliamentary Candidates in their bid to win more seats.
Dr. Charles Dwamena, also known as Dr. ‘China’ is the current Ghana Deputy Ambassador to China, who before the party came to power, was the Director of Finance and Administration at the New Patiotic Party’s headquarters.
He campaigned to contest the party’s National Executives election as National Treasurer but withdrew from the race because Ghanaian citizens based in China want him back to continue his good work there.
Before that, he had contested the Kwadaso NPP Parliamentary Primaries in 2016 but lost to the out-going Member of Parliament, Dr. Samiu Kwadwo Nuamah who also lost at their primaries. 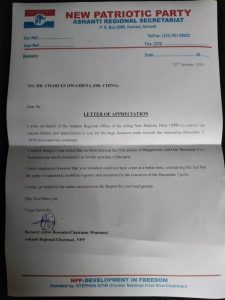