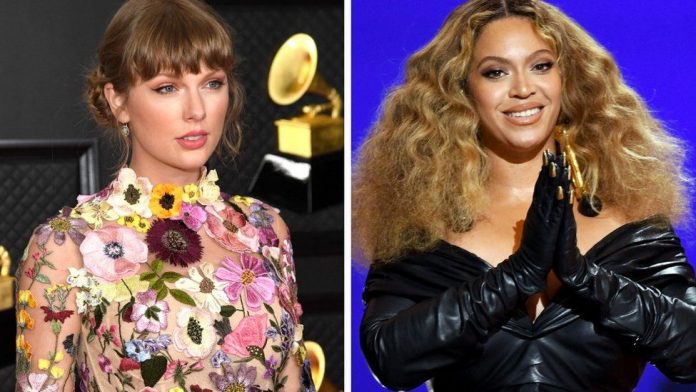 Beyoncé has set a new record at the Grammy Awards with her 28th win.

“I am so honoured, I’m so excited,” she said while accepting her record-breaking trophy, for best R&B performance.

Taylor Swift also made history at Sunday’s ceremony, by becoming the first female artist ever to win album of the year three times.

The star was rewarded for her lockdown album Folklore – after previously winning with Fearless in 2010 and the pop opus 1989 in 2016.

Only three other artists have ever won the album of the year prize three times: Frank Sinatra, Paul Simon and Stevie Wonder.

Beyoncé’s 28th Grammy was presented in honour of Black Parade, a celebration of black power and resilience, which she released on Juneteenth last year.

“As an artist, I believe it’s my job to reflect the times, and it’s been such a difficult time,” she said as she collected the award.

“So I wanted to uplift, encourage, celebrate all of the beautiful black queens and kings that continue to inspire me and inspire the world”.

The star has now equalled super-producer Qunicy Jones’ total of 28 Grammys. Only classical conductor Sir Georg Solti has more, with 31.

The Houston musician picked up the prize for her breakout hit Savage (Remix), on which Beyoncé delivers a guest verse.

Black Parade was not the only award-winner song to reflect the Black Lives Matter movement: R&B singer H.E.R. won song of the year for I Can’t Breathe, which quotes the last words of George Floyd.

The 46-year-old died while being arrested by police in Minneapolis last year. His death, along with that of Breonna Taylor, sparked a global wave of protests.

Accepting the prize, H.E.R. said she never imagined “that my fear and my pain would turn into impact”.

The singer, whose real name is Gabriella Wilson, was accompanied by her co-writer Tiara Thomas, and she recalled how they’d written I Can’t Breathe “over FaceTime” last summer.

“I recorded this song by myself in my bedroom at my mom’s house,” she said. “And I want to thank my dad – he cried, he was in tears when I wrote the song and I played it for him. He was the first person I played it for.”

“But remember,” she concluded. “We are the change that we wish to see and you know that fight that we had in us the summer of 2020, keep that same energy. Thank you.”