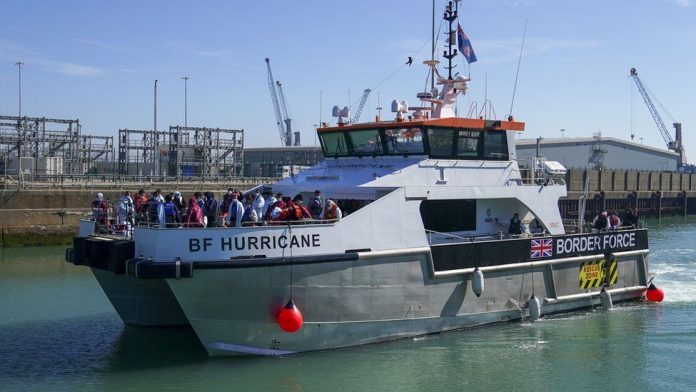 Boats carrying migrants across the English Channel can be turned back before they reach the UK, Border Force officials have been told.

Home Secretary Priti Patel approved the tactics after she and her French counterpart failed to agree on any new measures to stop the crossings.

The two sides met for talks on the crisis on Wednesday.

But a senior government source told the BBC the tactic would only be used in “very certain, narrow circumstances”.

And although the government is agreed on the idea of potentially turning back migrant boats to France, the operational details are still to be finalised, the source added.

The French are likely to oppose the move, with interior minister Gérald Darmanin saying that “safeguarding human lives at sea takes priority”.

France believes the idea is dangerous and flouts international maritime law. Under the law, people at risk of losing their lives at sea must be rescued.

So far this week, more than 1,500 migrants have crossed the English Channel by boat.

The UK government has said it needs to use every possible tactic at its disposal to tackle people smuggling, while the Home Office said it continued to evaluate and test a range of safe and legal options to find ways of stopping small boats making the dangerous journey.

The Daily Telegraph reported that Ms Patel had secured legal advice for vessels to redirect small boats away from British waters.

Sources told the paper the tactics would only be used when it was deemed safe and in limited circumstances, with Border Force staff being trained.

In a tweet Ms Patel said she had held constructive talks with French interior minister Mr Darmanin, adding: “I made clear that delivering results and stopping crossings were an absolute priority for the British people.”

But in a letter to Ms Patel before they met, Mr Darmanin said that the French position on interception was unchanged – and that employing turn-around tactics “would risk having a negative impact on our co-operation”.

“Safeguarding human lives at sea takes priority over considerations of nationality, status and migratory policy, out of strict respect for the international maritime law governing search and rescue at sea,” he said.

Mr Darmanin also said that while there had been an increase in the number of people making the crossing this was down to people smugglers using larger boats and other tactics such as decoy boats.