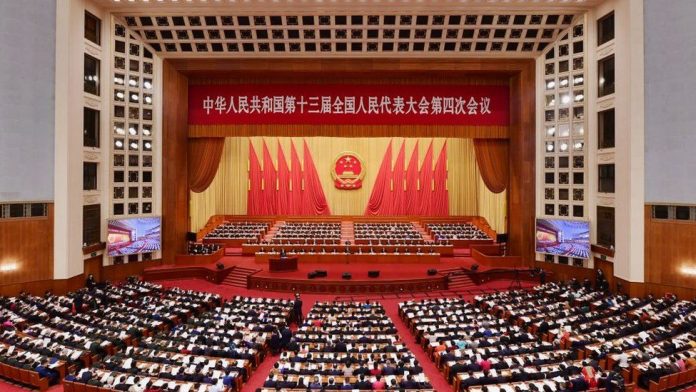 China announced at its biggest political meeting that it will overhaul Hong Kong’s electoral system to ensure “patriots” are in charge, a sign that the government will no longer tolerate dissent in the city.

The reform comes after a crackdown and tightened control of Hong Kong.

A draft decision will be discussed during the National People’s Congress (NPC), which will run for a week.

Thousands of lawmakers have gathered for the meeting in Beijing.

Besides the Hong Kong decision, the rubber-stamp parliament is expected to also discuss and approve economic growth targets and environmental policies from the central government.

What do we know about the changes planned for Hong Kong?

NPC vice-chairman Wang Chen announced on Friday that Beijing would change how the city’s electoral committee is formed, and give it new powers over Hong Kong’s law-making body, the Legislative Council (LegCo).

The electoral committee – which is stacked with Beijing supporters – would be able to nominate LegCo candidates and elect a “relatively large” share of its members, he said.

He did not give further details, but local media reported that the 70-member LegCo would see an increase in seats, and these additional members would be chosen by the electoral committee. This would effectively dilute the proportion of LegCo members who are directly elected by the public.

Mr Wang said the changes would fix what he called “loopholes” in Hong Kong’s electoral system, which had allowed opposition activists who advocated for the city’s independence to become Legco members.

The move comes after the implementation of a national security law that critics say is being used by Beijing to crush dissent in the city, and a crackdown on activists and opposition figures.

A number of arrests have been made, and last week saw 47 pro-democracy activists charged with “subversion” under the new law.

Hong Kong, a former British colony, is a part of China, but has been governed under the principle of “one country, two systems”, meaning it has its own legal system and rights including free speech and freedom of press.

But many in Hong Kong and rights groups have accused China of eroding those freedoms and autonomy in recent years. There were months of violent protests in 2019.

Ahead of the NPC, various Hong Kong and Chinese officials had already brought up the idea of “patriots” governing Hong Kong.

The city has been left with virtually no opposition after all of the city’s pro-democracy legislators resigned last year.

But until recently, Hong Kong had a small opposition that achieved success at local elections.

“In 2019, the pan-democrats did extremely well, which was alarming to the CCP because it showed that all their negative rhetoric didn’t seem to be working,” Ian Chong, politics professor at the National University of Singapore, told BBC News.

“I think for the CCP (Chinese Communist Party), they really want to remove the voices that they don’t like to hear.”