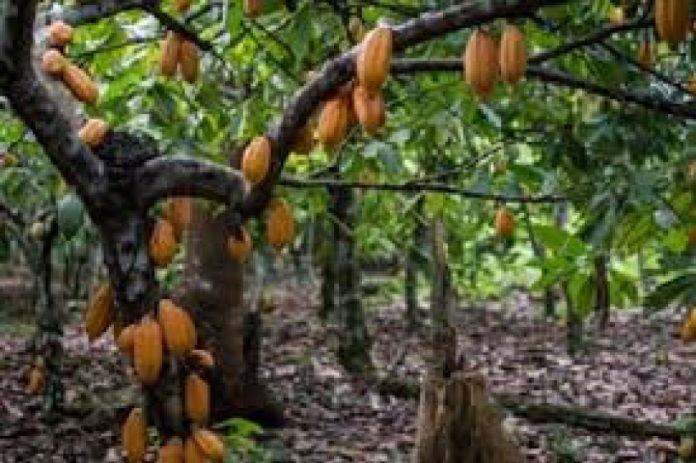 Yakubu Osman wants government to scrap the free program and replace it with a subsidized scheme as is the case with the subsidized fertilizer distribution scheme.

The Ghana Cocoa Board (COCOBOD) in 2017 announced the scrapping of the free cocoa fertilizer distribution program and replaced it with a subsidized scheme that will see farmers pay part of the cost of fertilizers.

This, government indicated will ensure all farmers benefit from its support and not just a few. Mr Osman wants that replicated with the mass cocoa spraying exercise.

“We are all Ghanaians but not everyone is benefitting from the government support. Just as government has done with the subsidized fertilizer, they should stop the free spraying. And distribute the chemicals at a subsidized cost.

“I should be able to have the chemicals in the store anytime I need it,” Osman said in an interview with Joy News.
At age 47, Yakubu Osman owns 245 acres of cocoa farms at Sefwi Asawinso in the Western Region. He is a self-made rich cocoa farmer who has been in the business since 1996. He, his two wives and 15 children plus hundreds of labourers manage his 43 different cocoa farms.
He complains pest infestation has been destroying farms reducing their yield. “The mass spraying exercise must be timely. Sometimes, the gangs come spraying. But before it gets to you, it’s finished,” he said with concern.

Government holds onto about 30 percent of the money it earns from cocoa sales on the international market, giving farmers only 70 percent. COCOBOD promises farmers freebies including free pest control, free seedlings and subsidized fertilizers to make up for their loss.
Under the Cocoa Pest Disease Control Program (CODAPEC), government imports chemicals and hire spraying gangs which travel to cocoa growing areas to spray farms for farmers to stop pest attacks. But some of the farmers say they are not getting that support.

“Government support for cocoa farming is not enough. Pests are attacking our fields but there aren’t enough chemicals to control them,” another cocoa farmer Frank Aduhene noted.

“Sometimes, chemicals come but there is no spraying machine, Sometimes, the machines are there but no fuel. But the season for the pest has come. So, they destroy the cocoa,” he added.

The farmers complain government pays them too low prices for the cocoa and want government to increase it from the present ¢475 per bag price.

“If government can take the price at which it buys cocoa to at least ¢500 cedis per bag, we will be happy. Because the cost of good chemicals is very high,” he said.

Majority Member of Parliament’s Agriculture and Cocoa Affairs Committee Kwabena Ohemeng Tinyaase has been responding to the concerns of farmers.

He says government is committed to ensuring farmers benefit fully from its support programs. He, however, disagrees with the call for a scrapping of the free distribution program.

“The program came because individual farmers could not buy the chemicals and do the spraying themselves. It is the management of the whole process at the farmer level which is a problem. The best way out is to address those problems and not to change the program,” he said.

The MP has also been responding to the demand for increased prices. He argues with the fall in the international price of cocoa, it will be difficult for government to increase prices.

“I think for the fact that they have not had any reduction in the price of cocoa they sell, even though the prices have gone down, I think the farmers should be able to make do with what they get.