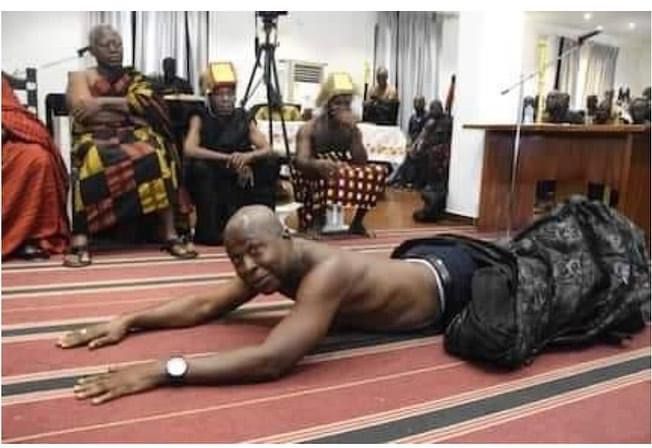 The embattled Benkumhene of Asamang Tamfoe Traditional Area Nana Boakye Darkwa is demanding a refund of a total amount of Ghc115,000 mining proceeds given to Ofori Panin Fie out of mining in the community.

According to him, the amount was paid on October 7, 2022 as goodwill money which was duly collected and acknowledged by the Ofori Panin Fie.

The amount was paid from the account of the community opened to collect contributions from miners in the community mining scheme for social corporate responsibility interventions.

Addressing the media Wednesday, the Benkumhene explained that “As part of a corporate social responsibility agreement the community has with the miners which Xtra Gold is privy to, some mandatory monies were paid by the miners and which is lodged in an accredited account in the name of the community. Asamang -Tamfoe recognizing and acknowledging the throne of the Ofori Panin forked out 115,000 Ghana cedis on 7/10/2022 as goodwill money to Ofori Panin Fie”

The Benkumhene, therefore, stated that, if the Judicial Committee chaired by Okyenhene Osagyefuo Amoatia Ofori Panin describes the community mining program as illegal mining hence his destoolment, then, should refund the money since it was from its proceeds.

This was after some residents in the community calling itself Concerned Citizens of Asamang Tamfoe petitioned the Akyem Abuakwa judicial council on November 9, 2022, accused the chief of engaging in illegal mining under the guise of community mining and polluting, degrading farmlands and threatening food security and livelihood of smallholder farmers.