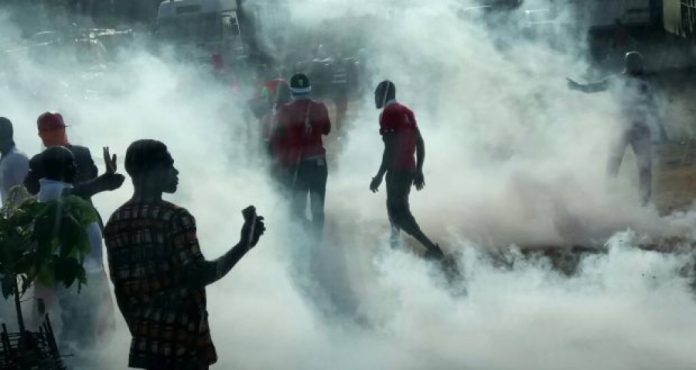 According to the GIS, it has picked up intelligence that the opposition in the country is planning a political protest in the capital, Lome to herald the burial of some civilians who lost their lives in last Saturday’s protest against the President and his family.

In an interview with Citi News, the Deputy Commissioner of Immigration in the Volta region, Isaac Owusu Mensah said it will be in the best interest of Ghanaians hoping to travel there to hold on.

“The only issue that has necessitated this is the fact that they are planning a big demonstration so we are just apprising our compatriots to just go about their normal duties and not to get involved in any form of political activity,” said.

Although he added that currently the town is relatively calm Mr. Mensah said a joint security team is monitoring developments at the borders.

“National security, BNI, Customs, Immigration and the police are all there. We don’t have any mass movement. From the statistics that I received from the borders yesterday, there hasn’t been any significant movement, it’s within the average.”

“I’m not asking for a military intervention, just a diplomatic reach out to his Faure Gnassingbe that he will be willing to play some role. Because I believe that President Akufo-Addo can be able to generate the confidence on both sides. They can see him as neutral mediator so that he can mediate between the opposition parties and President Faure Faure Gnassingbe especially because we are the closest neighbor, we will bear the brunt when things spiral out of control.”

“It’s not about meddling or qeuesting the sovereignty of Togo, not at all. But it’s just offering to be of assistance, it happens always. The ideal situation would have been ECOWAS stepping in and appointing a mediator at that level but this is the situation where the current Chairman is Faure Gnassingbe so I think that elder statesmen, his peers should be able to show some concern and interest and want to mediate,” he added.

Togo’s security forces over the weekend clashed with some anti-Gnassingbe protesters that erupted in the capital Lome, with demonstrations in Sokode in Togo.

Two protesters lost their lives in the process while 13 others had various degrees of injury after the security forces opened fire to disperse the demonstrators who were agitating against the ruling of the Gnassingbe family dynasty.

The demonstrators were demanding the country’s return to its 1992 Constitution which allowed multi-party democracy with a limited Presidential term of office; as many of them sang and chanted “50 years is too long”.

They also accused the President of superintending over corruption in the country.