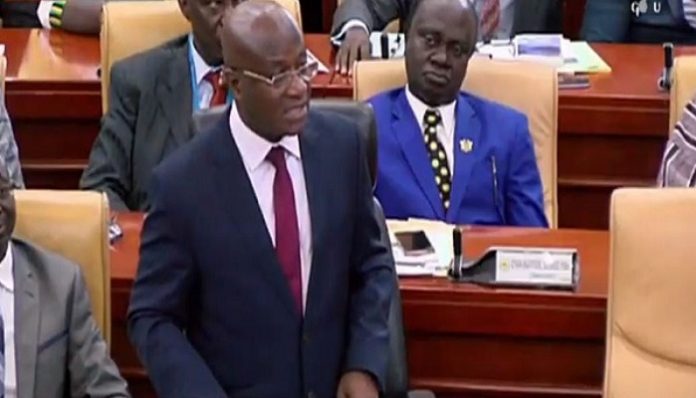 The Majority Leader and Minister of Parliament Affairs, Osei Kyei-Mensah-Bonsu, has said that the Majority Caucus made up of members of the New Patriotic Party (NPP) and the Independent Candidate from Fomena, have resolved to stand by the Republic to ensure the revitalization of the ailing Ghanaian economy with the passage of the E-Levy Bill.

Their position and posture on the bill, he noted, is unlike that of their NDC colleague MPs (Minority Caucus) who are hell-bent of ensuring the collapse of the economy by rejecting the E-Levy Bill which has been touted by some economists as one of the greatest innovations ever introduced by a government as a resource mobilization vehicle to get Ghana out of the woods.

At a sitting in Accra on Tuesday, February 1, 2022, the Majority Leader revealed to the House how his colleague, the Minority Leader, Haruna Iddrisu, told him of the NDC’s determination to stand by the people to prosecute their diabolical plan.

“Mr. Speaker, even before walking in here, the Minority Leader who is the Ranking Member of the Business Committee, asked about the status [of the e-levy] and I told him that we will come to some determination even though it has been advertised for tomorrow. If you look at the Supplementary Provisional Order Paper, Mr. Speaker you’ll see it advertised for tomorrow. Even that I told him that we need to confer on that because to all intent and purposes, we may not be able to do it tomorrow. So, he asked me whether that was an assurance and I said to him that that is double assurance that certainly it will not come off tomorrow but will be determined when, together. I have given him that assurance so it is not as if anybody wants to spring any surprise”, he noted.

On Friday, January 28, 2022, a leaked internal memo of the NDC signed by its General Secretary, Johnson Asiedu Nketiah, outlined strategies the umbrella family to implement in order to win Election 2024. Key among these strategies was to oppose the introduction of the E-Levy Bill.

Nketiah, mostly known in the political circles as General Mosquito, had told his people in the leaked internal memo that “A successful execution of these resolutions will undermine Government’s revenue mobilization efforts and force Government to go to the IMF. A situation that will inure to our benefit and ensure the success of “Agenda 2024”.

The governing NPP and the opposition NDC have been at each other’s throat over the introduction of the E-Levy Bill, with the former explaining that the sudden turn of events in the global economy following the outbreak of the novel Coronavirus calls for innovative ideas in revenue mobilization to help turn the ailing economy around.

The opposition NDC on the other hand argues that the bill if allowed to be passed will worsen the plight of the ordinary Ghanaian, hence, their resolved to stand with them and ensure that it never sees the light of the day.

Consideration of the bill at the last sitting of the Third Meeting of the First Session of the Eight Parliament of the Fourth Republic resulted in fisticuff following attempts by NDC MPs to take away the Speaker’s chair.

Continuing with his explaination to the House why the E-Levy Bill was not introduced to the House on Friday, January 28, 2022, even though such wasn’t part on his presentation of the Business Statement for the week, Mr. Kyei-Mensah-Bonsu, said some engagements with the Leadership of the Minority and at the Speaker’s Conclave triggered such a move.

“Mr. Speaker, as the House may recollect, when I came to present the business statement for this week, indeed, for last week, there was no indication that the e-levy bill was going to be taken. That is true. But subsequent to that, there were some engagements between the leadership of the two Caucuses and it was determined that the e-levy bill will be introduced to the House last week Friday.

Mr. Speaker, at the Speaker’s Conclave, we further had this discussion. So, it was not a matter of surprised. Mr. Speaker, when I came to presenting the Business statement for this week, I said if we were able to conclude the discussions, on the way forward for the e-levy, it will be introduced in the House on Friday. Then it will come this week. But in the course of the discussions facilitated the introduction in the House on Friday. Mr. Speaker, as we all witnessed, we couldn’t make much progress which is why I said to us that if we couldn’t then it will come to this week”, he explained.

Reacting to the issue raised, the Minority Leader, Haruna Iddrisu, said last Friday, their side will at this juncture not entertain any surprises considering the introduction of the E-Levy Bill.

He said it would be important for Kyei-Mensah-Bonsu, who is the Leader of Government Business, to be specific to the House when the Bill be will either reintroduced to the House as a new bill or otherwise.

Nevertheless, he said the NDC MPs as already made it publicly, will stand with the public to reject the bill.

“Mr. Speaker, we want the Leader of Government Business to lead us through when we will have the bill – will it be reintroduced? Is it a new Bill or under Article 106, the bill is gazetted for us to know or we are continuing wanting under Article 106 to suspend our Standing Orders to take it as a matter of urgency. Mr. Speaker, members need to know because on this matter as we have publicly said, we want to stand with the public in our opposition and rejection of this bill. We don’t want to be taken by surprises”, he noted.