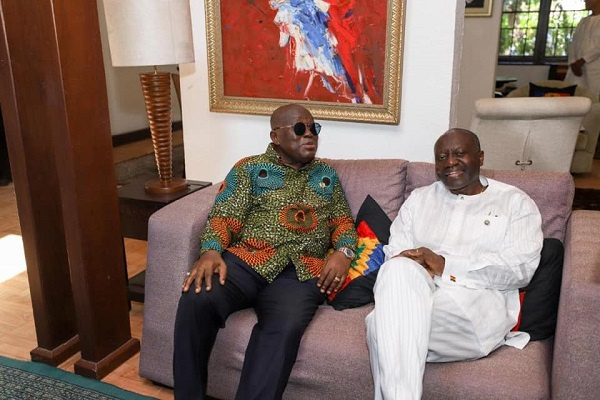 Reliable information intercepted by Frontpageghana.com on the corridors of power indicates that the Council of Elders of the ruling New Patriotic Party (NPP) has thrown its weight behind the 80 NPP Members of Parliament seeking the dismissal of the two Finance Ministers.

According to the sources, the Secretary of the Council has been tasked to write a letter for the Chairman, Hon. Hackman Owusu Agyeman to sign and forward it to President Akufo-Addo.

The intel said the Council of Elders supports the call by the 80 NPP MPs because according to them, things are getting out of hand, and these MPs also feel the pressure of their constituents.

Our source hinted that the President doesn’t heed to their advice; saying there were many times they have drawn his attention to certain occurrences in the country, especially in the area of Finance; including the galloping rate of the dollar against the Cedi, but he always thinks otherwise and is adamant.

The Council’s fear this time, according to the sources, is that if the President disagrees with the Majority NPP MPs, and they walk out on Parliament or fail to support the 2023 Budget as they have threatened to do, the country will suffer and the party will pay for it in 2024.

They also said they don’t understand why the President is still keeping the Finance Minister when many Ghanaians including some party supporters are calling for a reshuffle.

“Or is it because Ofori-Atta is his cousin that is why he does not want to change him,” the source queried.
“The President formed a government that we were against. Some of his appointees are not mature at certain positions but he didn’t listen to us when we drew his attention,” the source added.

According to the source, the Council has said that if Mr. Owusu Agyeman, a known good friend to President Nana Addo Dankwa Akufo-Addo fails to sign the letter to the President, the Council Members are ready to also ‘kick him out, because if care is taken, the Elephant party will suffer for it.

On Tuesday 26th October 2022 in Parliament, some 80 NPP Members held a press conference to announce their displeasure and demanded why the President is still keeping the two finance ministers when Ghanaians have been calling for their resignations due to the country’s economic crisis.

The MPs threatened that if the two are not sacked by the President immediately, they will not support any government business that comes to the floor of Parliament and will not participate in the 2023 Budget presentation and its debate.

The call by the MPs from the President’s party was joined by many political players and a section of the business community.

Tempers are calm now, and the MPs have acceded to President Akufo-Addo’s pleas to allow the Finance Minister to complete the IMF deal and also present the 2023 Budget before he leaves office.