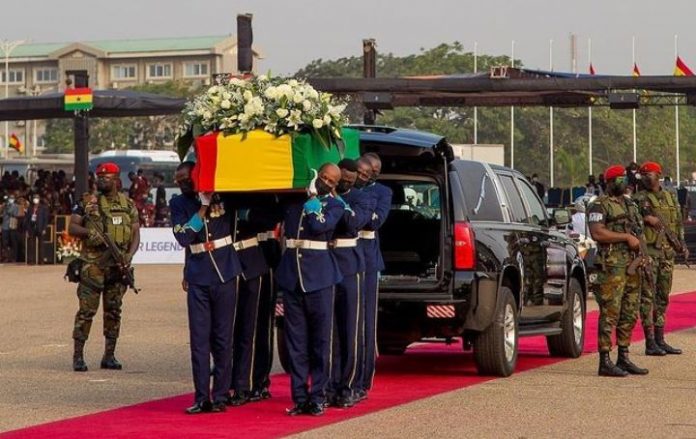 Ghana, on Wednesday interred its longest-serving Head of State, Flt. Lt. Jerry John Rawlings, after a state funeral service, which saw tributes extolling his virtues and monumental contributions to the country’s socioeconomic growth.
It was all sorrow and tears, when the 21-gun salute befitting his status as a former Commander in Chief of the Ghana Armed Forces, boomed, signifying the end of his journey here.
Prior to this, the Most Reverend Gabriel Edoe Kumordji, the Bishop of Keta-Akatsi Diocese of the Catholic Church, blessed the grave and performed the committal prayer at the new Military cemetery, Burma Camp, Accra.
At the Insignia Presentation, all the medals former President Rawlings received during his active service in the Ghana Armed Forces were handed over to his son at the cemetery.
The body was enclosed in a coffee brown casket, draped in the national colours of -red, gold, green and black.
Also READ: Xi Jinping Full Speech Delivered at World Economic Forum Virtual Event of the Davos Agenda
The burial was preceded by a military cum family funeral cortege through the principal streets of Accra, to allow Ghanaians who could not visit the funeral grounds to pay their last respect to him.
A helicopter flyover accompanied the procession to compliment his status as an accomplished Military Pilot for, which he won many medals.
The burial followed an elaborate four-day state funeral, which was climaxed with a military burial service at the Black Star Square.
The ceremony saw people from all walks of life eulogising and paying their last respect to a national leader who ruled the nation for 19 years.
Many thousands of mourners participated in the solemn but colourful burial service at the Black Star Square and from virtual platforms.
President Nana Addo Dankwa Akufo-Addo, read the nation’s tribute, commending him for his distinguished service during the different eras that he entered the political space.
“I believe that history, on balance, will be kind to him, and will render a positive verdict on his contribution to the evolution of our nation, and the entrenchment of its democratic institutions and culture.
And READ: Nollywood actor, Ernest Asuzu, dies at 37
“It is entirely appropriate and fitting that he should receive a state funeral with full honours to express the gratitude of the nation for that contribution,” President Akufo-Addo, said.
“I called him Commandante,” because of his admiration for the famous Latin American revolutionaries, Fidel Castro, Hugo Chavez, and Daniel Ortega, a nickname which seemed to please him, he said.
Mr Eric Gbeho, Son of former Diplomat, Ambassador Victor Gbeho, read his biography, which captured his early and education life, political career, international relations, awards and honours in his 73 years on earth.
It also eulogised him for his charismatic leadership, values and beliefs, which endeared him to many.
The tribute by Nana Konadu Agyeman- Rawlings, the widow, was read on her behalf by Princess Amina Rawlings, one of the daughters of the Rawlings, which recounted the love life of the couple.
She said, “We started on the journey with wonder at the world, we skipped along with heads held high. Our flag of hope unfurled. Enthusiasm filled our days as optimistic grew.
“I had to learn to understand how to be streetwise, move along with the flow of your friends and acquaintances but it still did not sit well with me- It went against all the upbringing I had intensely received under the roof of my parents”.
There were tributes from the Armed Forces, his children and the National Democratic Congress-the political party he founded.
Wreaths were laid on behalf of the Government of Ghana, the family, the widow, children, the Anlo State, ECOWAS and African Union.
The Ghana Armed Forces’ Central Band, the Police Band and the National Symphony Orchestral, provided a medley of dirges and patriotic songs at the ceremony.
The Right Reverend Samuel Kofi Osabutey, the Methodist Bishop of Accra Diocese, in a sermon, noted that the authority given to individuals was meant to serve people and advance their wellbeing.
He said it was, therefore, important that people in authority understood that there was a day of reckoning.
The biography of former President Rawlings and various tributes captured the values and principles he believed in and practised throughout his life.
Former President Rawlings is touted as the “People’s Man” for his charisma and values of probity, accountability and social justice that enamoured him to many.
He was born on June 22, 1947 in Accra (Gold Coast, now Ghana)
He passed away on Thursday, November 12, 2020, at the Korle-Bu Teaching Hospital after a short illness and was 73 years.
Rawlings was survived by his wife, Nana Konadu Agyeman-Rawlings and four children; Dr Zanetor Agyeman-Rawlings, Amina Rawlings, Yaa Asantewaa Rawlings and Kimathi Rawlings.
GNA