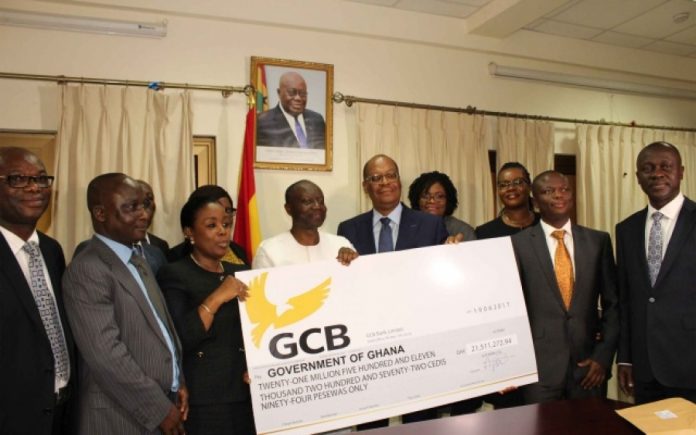 Mr. Anselm Ray Sowah, Managing Director of the Bank, presented the cheque for the amount to the Minister of Finance, Ken Ofori-Atta.The Minister commended GCB for its performance and urged its officials to continue to work hard and put the necessary measures in place that will push up profits and impact the quantum of dividend paid to the state. Mr. Ofori-Atta emphasised the important role GCB plays in the national economy by virtue of its branch network of 161 across the country, which is well acknowledged and which positions the Bank in strategic stead for the implementation of the government’s One-District-One-Factory initiative.He promised that because of the role GCB will be expected to play in this initiative, government will ensure that it channels more business through the Bank to enable it play this role efficiently.The Minister commended GCB for earmarking GHC1.0b of its funds towards the Government’s Initiative adding that “GCB is the vanguard for the transformation of the nation”. He urged the Bank and its leadership to aim at being the best bank in Ghana as it is seen as the representative Bank of the nation.“Technology will play a key role in the nation’s transformation agenda and electronic payments will be very important, you may therefore want to pay attention to your electronic modes of payment and handle them efficiently”, Mr. Ofori-Atta added. Another area of interest to the Minister is the money transfer business and he urged GCB to take advantage of the large Ghanaian presence in the diaspora to attract foreign exchange capital for the benefit of local business.Mr Sowah gave the assurance that GCB will play its part to ensure economic stability for the nation. —