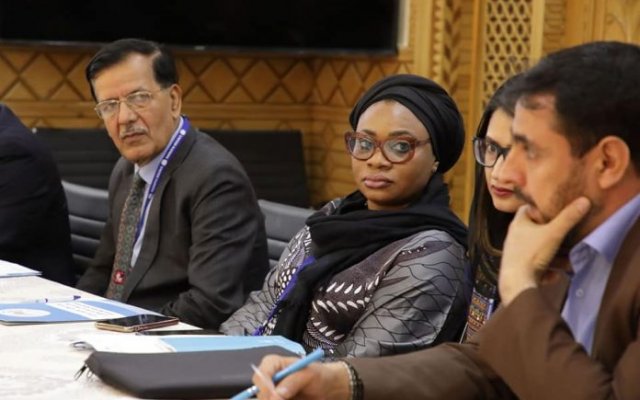 The Afghan media has started publishing some of the allegations which led to the impeachment of Ghana’s first female Electoral Commission Chairperson, Mrs Charlotte Osei, who is currently serving as an International Elections Commissioner for the UN in Kabul, Afghanistan.

Mrs. Osei joined a team of other UN-appointed election experts from around the world to provide much-needed technical support, capacity-building and electoral best practice advice to the Election Complaints Commission and the Independent Electoral Commission charged with delivering a peaceful democratic process and credible elections as Afghanistan prepares to hold presidential polls in September 2019.

Mrs. Osei is a lawyer, who served as Ghana’s EC boss from 2015 until she was dismissed in June 2018 on grounds of financial malfeasance, an allegation she denied.

Even though she is now on international assignment, the same issues which haunted her in Ghana are playing out in the Afghan media.

One of such reports was by the Daily Outlook Afghanistan as captured below http://www.outlookafghanistan.net/national_detail.php?post_id=23824:

KABUL – In line with the election law, two members of the IECC should be foreigners who would share their experiences with local commissioners for free and fair polls and would bring their expertise into practice for transparent polls.

Mrs Charlotte Osei breached procurement laws in the award of several contracts, prior to the 2016 elections in Ghana, the Graphic Online claimed.

Their removal was based on recommendations from a committee that investigated corruption and misconduct allegations against them.

They accused Mrs Osei of taking unilateral decisions without recourse to the appropriate departments of the EC.

The group also accused the EC chair of engaging of fraudulent activities, citing her decision to cancel a contract awarded to Superlock Technologies Limited (STL) to supply and manage Biometric Voter Registration (BVR) machines and Biometric Voter Devices (BVDs), as well as her directive for the payment of $76,000 to IT firm, Dream Oval.

After about a year of investigations, the Chief Justice’s committee handed over its report to the presidency.

Minister of Information Dr Mustapha Abdul-Hamid said:”This was after the Committee set up by the Chief Justice, Justice Sophia Akuffo, pursuant to Article 146(4) of the Constitution, to investigate separate complaints brought against the three persons by Ghanaian citizens, recommended their removal from office.”

There is evidence on record that before the 2016 general elections the Electoral Commission secured donor support from the USAID through the Ministry of Finance.

The support was for a sum of $2,367,500.00 which the Electoral Commission was to apply to improve its ICT environment.

In October 2016, the chairperson, the minister of finance/designate and the USAID mission director signed a grant document titled ‘Implementation letter Number 641-Ai0-FY14IL#03 under DOAG No. 641-001 Strengthened Responsive, Democratic Governance for support to the Electoral Commission of Ghana for a New Activity: Enhancing Inclusive in Ghana’s Electoral process'(hereinafter referred to as the Grant Document).

In a bid to procure the services of a contractor for the said project, three quotations were received by the commission for consideration. Indeed, according to the chairperson, she personally recommended Dreamoval Ltd which was a group from Ashesi University.

From these three companies, the chairperson, the director of finance and the head of the donor desk selected Dreamoval for the contract.

As a result, an initial contract worth $32,510.00 was awarded to Dreamoval Ltd. to re-design a website for the Electoral Commission.

After the completion of the initial contract for re-designing the website of the Electoral Commission, Dreamoval had to offer extended technical services to the poll panel to protect the website which was under cyber-attack.

According to the chairperson, Dreamoval Ltd had to work round the clock to avoid a breakdown of the website. After the extended work, Dreamoval submitted an additional bill of $76,000.00.

The chairperson discussed the new bill from Dreamoval with the USAID, which agreed to pay provided there was a contract for the additional or extra work done by Dreamoval.

There is evidence on record that apart from the contract to repackage the strategic plan for the commission, funded by UNDP, Quazar Ltd was awarded another contract to develop a logo for the panel at a cost of GHC23,470.01.

This contract was funded by the government of Ghana. On completion of the work, the director of finance and the chief accountant wrote on the 8th of March, 2016 to the Bank of Ghana to transfer $6,080.31 being the equivalent of GHC23, 470.01 into the account of Quazar Ltd at the First National Bank, Guateng.

Two contracts were awarded to Quazar Ltd. The first was about repackaging a strategic plan of the commission funded by the UNDP.

The second contract for developing a logo for the commission was funded by the government of Ghana. It is clear from the evidence that the allegation that the chairperson unilaterally awarded contracts to Quazar Ltd is not true.

The contract to repackage the strategic plan was awarded after a meeting of stakeholders was held at the instance of the UNDP.

The contract was awarded after three quotations submitted by three companies had been evaluated by a three-man evaluation panel, chaired by the director of finance of the electoral commission.

On the 31st of May 2016, the director of finance of the commission wrote to the UNDP country director to effect direct payments to Quazar Ltd for the work done.

The problem with the contract awarded to Quazar for the repackaging of the strategic plan was the method used to engage Quazar Ltd.

The evidence disclosed the commission had used a restricted bidding procurement process, which identified three companies to submit quotations.

In view of the fact that a restricted tender was used, prior approval of the Public Procurement Authority was required under Section 38 of Act 663, as amended, for the process to be lawful.