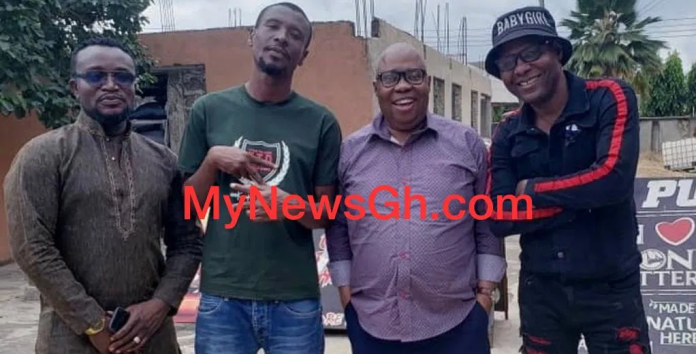 It was observed that Ghanaian Legendary rapper, Jerry Johnson Anaba popularly known as Okomfour Kwadee is in the company of highly esteemed entertainment industry greats and matured acts as he set to take the country by storm.

Our independent observation over the award-winning rapper’s recovery from a manic depressive ailment he suffered for over a decade has shown that, the ‘ofie nipa’ hitmaker is doing extremely well and has had the needed support from well-wishers.

Kwadee who has stayed away from the media for some time now has been seen in the company of Hi-Life greats like Adane Best, Kaakyire Kwame Appiah, Kwame Adinkrah, XLNC Scooby Fiifi Selah of TH4Kwages and SAS squad, Skrewfaze and actor Majid Michel as we can exclusively confirm that the healthy halcyon rapper has been given a private car for his personal usage by his handlers who has until date pled anonymity.

Although the rapper has hinted if releasing an EP soon, MyNewsGh.com is confident that, Okomfour Kwadee will be back to the Ghanaian music scene sooner than expected.

Check out some of the exclusive photos and videos gathered by MyNewsGh.com as the rapper spends time with some of the mature Ghanaian entertainment celebrities.