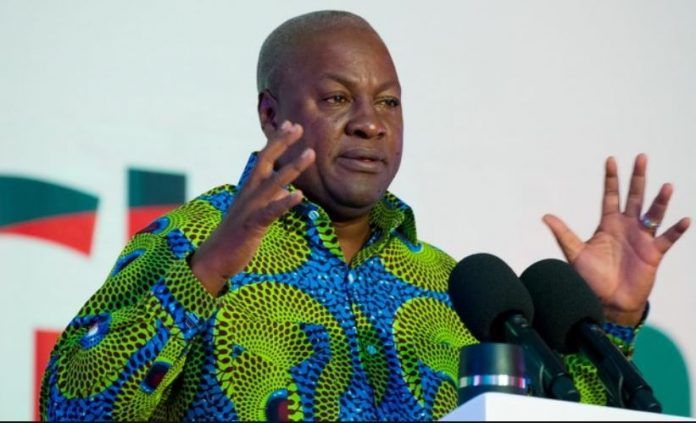 The flagbearer of the opposition National Democratic Congress (NDC), John Dramani Mahama says the Akufo-Addo government must urgently act to stop the spate of violent crimes and dastardly robberies in the country.

He said there is rising insecurity in the country and it must be quickly tackled by the government.

Mr. Mahama made the call on the back of the killing of the Mfantseman Member of Parliament, Ekow Quansah Hayford.

The NDC flagbearer in a Facebook post to commiserate with family also urged the security agencies to speedily investigate and bring the perpetrators brought to book.

“I have received the shocking news of the death of Hon. Ekow Quansah Hayford, MP for Mfantseman in a reported armed robbery attack. My condolence to his family. This is the most despicable act, and we all look forward to the security agencies investigating and arresting those involved and bringing them speedily to justice.”

“There is a growing climate of insecurity in Ghana. Dastardly armed robberies and violent crime have become a common occurrence. I urge the government and the security agencies to do more to protect the Ghanaian people.”

He further said, “It’s probably also time to look at the provision of armed police guards for our MPs.”

On the same issue, Mahama’s running mate for 2020 polls, Professor Naana Jane Opoku-Agyemang has also condemned the killing of the MP.

Prof. Opoku- Agyemang said state security agencies must immediately investigate the killing and bring the perpetrators to face the law which she said will serve as a deterrent to other criminals.

“I don’t think this is something anybody would want to wake up to that somebody has been murdered for whatever the reason may be. But we know that some of these things do happen in our country and it is my trust and hope that the security agencies would take the necessary measures to ensure that it doesn’t happen again and that whoever did this would be brought to book.”

“There’s been concerns about the level of insecurity in the country. I don’t think that anyone would be so secure that they will say they don’t need to take our security seriously. It is something that every government has to continuously work at because people have to feel safe. My heart goes to his family, Ghanaians and everyone. And all of us should be cautious. Safety should be everybody’s concern and the government must ensure that those who commit these crimes are brought to book so it serves as a deterrent to others.”