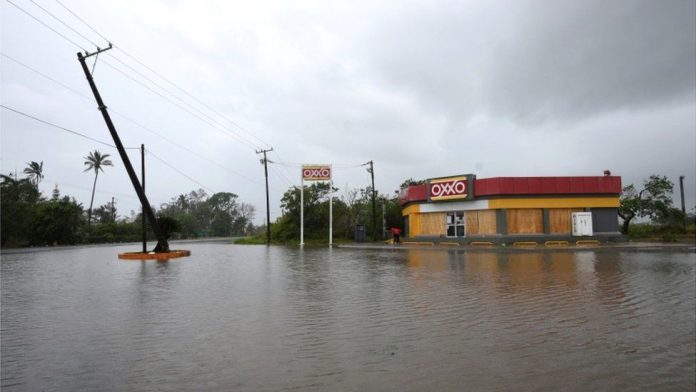 At least eight people are known to have died after Hurricane Grace tore through eastern Mexico, bringing torrential rain and high winds and causing power cuts and flooding.

The deaths and the worst damage occurred in the state of Veracruz, where the storm uprooted trees when it made landfall early on Saturday.

In the state capital, Xalapa, many streets became rivers of mud.

The hurricane later weakened to a tropical storm as it moved inland.

A road next to a convenience store is flooded after Hurricane Grace slammed into the coast with torrential rains, in Costa Esmeralda, near Tecolutla, Mexico, 21 August 2021

However, high winds and downpours were reported to be causing more flooding as Grace travelled north of Mexico City.

The storm brought wind speeds of up to 200 km/h (125mph) when it reached the coast of mainland Mexico. Of the eight people killed, six were members of the same family, state government officials said.

Residents of the coastal town of Tecolutla, in Veracruz state, said the hurricane had been devastating.

Another resident, Adolfo Lopez, said: “The roof… everything is gone, it took everything with it.”

Xi Jinping Delivers a Written Speech at the World Leaders Summit at the 26th Session of the Conference of the Parties to the United...