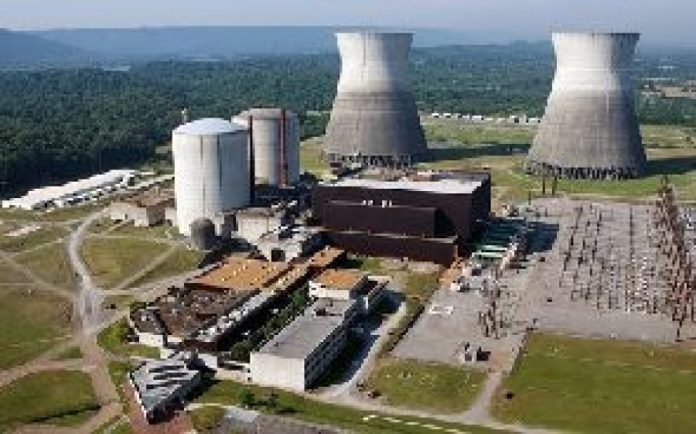 The two-member delegation, led by Mr. Mikhail Chudakov, the Deputy Director-General and Head of the Department of Nuclear Energy at the IAEA, submitted the report to Mr Boakye Agyarko, Ghana’s Minister of Energy, at a meeting in Accra.

Mr. Chudakov said the report formed part of Phase One of Ghana’s Nuclear Power Programmes (NPP) of which the INIR mission evaluated the status of the 19 major infrastructure issues against the IAEA’s Milestones Approach for the introduction of nuclear power.

He explained that the INIR mission was not an audit by the IAEA, but rather a supportive mechanism to newcomer Member-State in their development stages of their Nuclear Power Programme (NPP) and praised the Ghana team for the transparency and cooperation exhibited throughout the process of conducting the INIR Phase One in January this year.

“I am encouraged that even though Ghana is still in an early phase, Ghana has already enacted a comprehensive nuclear law, established an independent Nuclear Regulatory Authority, and is currently reviewing existing, and developing appropriate new regulations”, he said.

He however said as recommended by the INIR mission’s report, Ghana must do well to complete the studies on some key issues that remained to be concluded and proceeded with the development of the nuclear infrastructure to reach Milestone One to enable it’s government to make a knowledgeable commitment to a NPP.

Mr. Chudakov said the report also recommended further assessment of the country’s legal framework, to ensure its adequacy for the construction of the nuclear power plant.

He said the country also needed to prepare itself for an early Phase two activity, which included discussions with vendors and other potential partners, but indicated that Ghana had 90 days following the submission of the report, to inform the IAEA if it wanted the results of the INIR mission to be published on the IAEA website or not.

He said the IAEA considered energy as essential to development, and believed that everyone must have access to modern sources, to reduce poverty, raise living standards, improve health care, and boost industrial as well as agricultural output.

Unfortunately, the growing demand for energy had come at a time when the world was already on a dangerous and unsustainable path in terms of climate change and air pollution, however nuclear power had remained a proven technology that provided a stable, clean, low-carbon, baseload electricity that created better, higher-paying jobs than the other types of energy sources.

Mr. Chudakov due to its unique characteristics, nuclear power needed special attention in the area of observing high safety, security and safeguards, which required that a strong regulatory framework among other 19 infrastructural issues be considered, alongside a specialised and highly trained workforce for effective operation.

He pledged the IAEA’s commitment to offer targeted technical assistance in key areas, and said Ghana had 90 days to make a formal request to the Agency, otherwise the report would automatically be published on its website.

Mr. Agyarko, expressed his gratitude to the IAEA, the Ghana Atomic Energy Commission (GAEC), and the host of experts as well as all the local stakeholders, who worked to make Ghana’s Phase One INIR mission programme a success.

He said the inclusion of nuclear energy into the national grid was in line with the country’s short-to-medium term development target, as it strived to meet the growing power demand to sustain industrial and economic growth that was required for a middle income economy, and this would further develop a strong backbone for the West African Power Pool.

He said to achieve this goal, the country had since 2008, taken careful steps in the quest to develop its Nuclear Power Infrastructure, which included the inauguration of the Ghana Nuclear Power Organisation to establish the terms of reference and roadmap for the successful take-off of the NPP.

He assured the IAEA that the Ministry would carefully study the report and address the recommendations as proposed, and urged all the related institutions to put in their best efforts to continually support the NPP.

Prof. Benjamin J. B. Nyarko, the Director-General of the Ghana Atomic Energy Commission, said the INIR mission was helpful in that it had provided an objective review of the status of the country’s infrastructure nuclear development and also helped it to identify priority areas that needed to be focused on, to ensure the fulfilment of the requirements of the Phase one milestone of the roadmap.