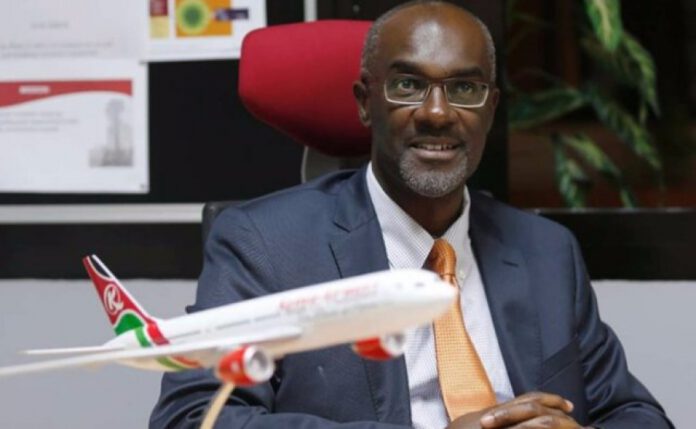 From humble beginnings Kenya Airways has grown to become a leading player in Africa connecting the region to the World and the World to Africa through its hub in Jomo Kenyatta International Airport (JKIA), Nairobi. The airline launched its inaugural flight on 4th of February two weeks after the company was incorporated on 22nd January 1977.

Over the last four decades Kenya Airways has emerged as an important economic drive in Kenya and the region as a whole.

“Today Kenya Airways connects directly from Nairobi to more than 54 destinations in four continents, with a fleet of 36 aircrafts from the initial 4. It has been an interesting journey and we believe our best years are ahead,” said Kenya Airways’ Managing Director and Chief Executive Mbuvi Ngunze.

He was speaking during the celebrations held at JKIA Terminal 1A with customers and partners. He noted Kenya Airways growth has been characterised by a strategic network expansion focusing on Africa, fleet modernisation, and high quality service among other facets of development.

In addition, Kenya Airways was the first African flag bearer carrier to be privatized, in 1996, a move that saw it listed across East Africa.

The airline has commercial partnerships with various global carriers, including a joint venture with KLM and codeshares with airlines in Europe, Asia and Africa. Through its membership in the Sky Team Alliance, Kenya Airways offers service to 1,057 destinations in more than 177 countries.

Beyond Kenya, Mbuvi cited that the growth and economic transformation of the region and African continent is largely tied to success of Kenya Airways owing to its pivotal role in promoting trade; cultural exchanges, enabling an exchange of ideas as well as promoting peaceful co-existence among people of different beliefs and cultural backgrounds.

He noted the journey was made possible by the tremendous support from staff, guests, partners and shareholders.

“We sincerely thank everyone who have been a part of this journey in the past and today, and look forward to many more years of being the Pride of Africa. Kenya Airways is committed to continue serving the region promoting trade, and offering quality service to our guests,” he said.

As part of the celebrations, Kenya Airways had launched a sales campaign offering customers up to 40% discounts on tickets to various destinations across its network. The offer also includes a special US$ 1977 price for its business class tickets to Europe; Paris, London and Amsterdam.