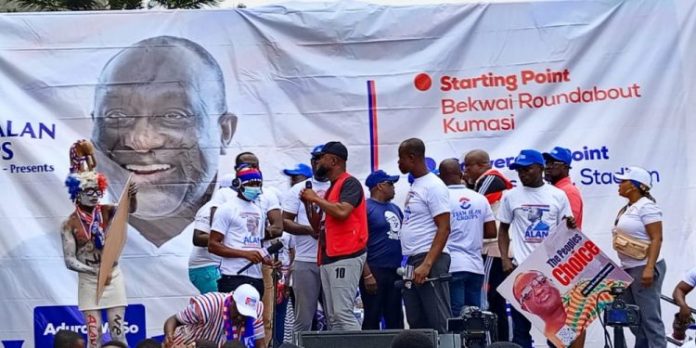 Scores of New Patriotic Party (NPP) on Saturday (August 13) embarked on a health walk and declared their support for Trades Minister Alan Kyeremateng, ahead of the governing party’s presidential primaries.

Despite calls by national executives of the party to get the event cancelled, the organizers ignored the order.

Dubbed, ‘Aduru wo so’, meaning, ‘it’s your turn’, party supporters wore branded party T-shirts that had pictures of Alan Kyeremateng. Some were also spotted wielding placards with several inscriptions.

There are fears of fresh tensions within the party after its National Organizer, Nana Boakye threatened to sanction Mr. Kyeremateng. But the organizers of the event have been mounting a strong defense.

According to Sledge Bonah, “when Nana Boakye, our current organizer served as a youth organizer, he endorsed certain candidates. Right after the regional conference, we have seen Regional Chairmen endorsing their preferred candidate. We’ve also seen the current National Womens’ Organizer mobilizing all regional organizers to greet a particular presidential aspirant but they [the executives] have said nothing [about this].”

He added: “Hon. Alan never supported this walk, but we told him we will still organize it. These are all groups in Ashanti Region coming together to embark on this health walk and I find nothing wrong with that. The grassroots have spoken and the party must listen.”