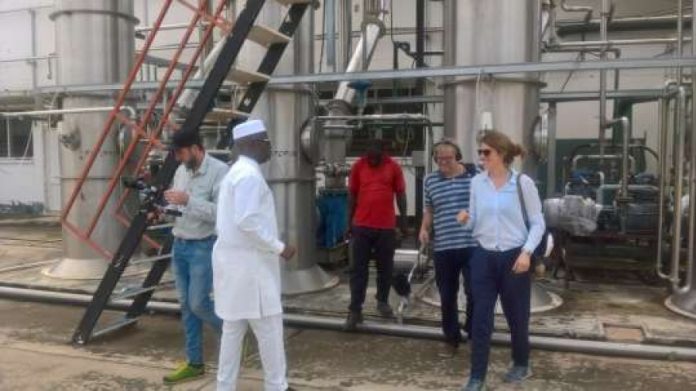 The Minister made the call when a television crew from the Association of Public Broadcasting Corporations in Germany, led by their reporter, Ms. Joana Jaschke, paid a visit to the Factory to do a documentary following a feature article written by Mr. Samuel Akapule, a Senior Journalist of the Ghana News Agency, on the state of the Factory.

Briefing the journalists, Mr Bukari said apart from the 300 workers of the Factory who were laid off, more than 1,250 tomato farmers from communities in the Region who cultivated tomato to feed the factory were also out of job.

He said no investor would regret to partner the Government to revamp the Factory since it would improve revenue as the Vea and the Tono Irrigation Schemes and the vast agricultural land in the Region, could serve as arenas for the farmers to cultivate raw material to feed the factory.

“This Government is very passionate about private partnership that will help bring industrialisation and improve the lives of the people. We will, therefore, be very grateful with any investor who will want to partner with us to help revive this important national asset to create employment and wealth for the people, especially the youth,” Mr Bukari said.

Touching on what led to the closure of the factory, the Regional Minister said the problem was due to lack of leadership, political commitment and financial constraints.

He noted that the Factory, when put back on its feet, could produce to feed the country and export to neigbouring countries including Togo, Burkina Faso and Mali to earn some foreign exchange.

Mr. Vincent Atarisaga, the Technical Officer of the Factory, explained the production stages and said all the machines were fully functional except the three vacuum pumps, which had problems.

He said the Factory had the capacity to produce 500,000 metric tonnes of tomato paste per day and that one of the major factors that collapsed it was the lack of machines for canning the paste, thereby compelling it to send the product to an Italian company in Accra to be canned.

Mr. Joseph Beni, the Regional Crop Officer, said a new variety of tomato suitable for cultivation had been developed for farmers and that opening the Factory would support the Government’s Planting for Food and Jobs Policy.

Some of the farmers the GNA spoke to expressed disappointment at the state of the Factory and said they would be most grateful if the Government could fast-track the process of revamping it.

“We used to pay our children’s school fees and cater for our family needs without much problem when the Factory was in full operation but now most of us cannot do so, thereby causing rural urban migration, particularly the youth, who used to get employment from this Factory,” Mr Ibrahim Salifu, the Spokesperson for the farmers, said.

Ms. Jaschke pledged to show the documentary on their television network and expressed optimism that it would help attract investors from Germany to partner the Government to revive the Factory.