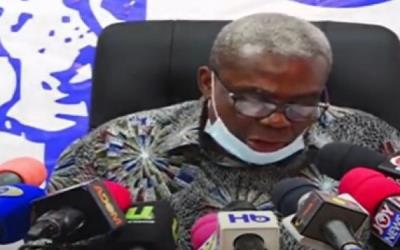 The New Patriotic Party (NPP) has stated that the NDC has realized they do not have a good candidate and a good story to tell voters in December.

It accused the opposition of fabricating grounds for chaos and disunity with its allegation of plots to rig the elections in 2020 with a new voters’ register.

The party challenged the NDC to face the reality that they have an albatross around their necks in their chosen flagbearer, John Dramani Mahama.

National Campaign Chairman, Peter Mac Manu, at a press briefing on Thursday 14th May 2020 charged the opposition not to prepare excuses to justify its evitable loss.

The NDC has accused the Electoral Commission (EC) and the National Identification Authority (NIA) of plotting to rig the 2020 elections for President Akufo-Addo and the ruling NPP.

Mac Manu questioned why the NDC is determined to derail the compilation of the new voters’ register that promises enhanced security features.

“What is it about the 2012 register that the NDC holds sacred and claims if it is replaced, they will never win an election?”

“In what way do they tie their electoral fortunes to the maintenance of a discredited register? They ought to tell us,” he said.

He assured that the NPP will not be part of any conspiracy to rig the elections but stressed the NDC’s fake conspiracy theory is borne out of fear of losing a free and fair contest.

He questioned why the opposition is placing its electoral fortunes on a register that was compiled under their term in office.

Mr. Mac Manu argued that since the establishment of the 4th Republic, new registers have been compiled at various stages towards perfecting Ghana’s democracy; in 1992, 1996, 2004, and 2016.

“So basically, we have had new registers compiled every eight years since 1996. And for each of those exercises the idea has been to introduce features that are better than the previous one with the view to secure the sanctity of the register,” he said.

The Chairman stressed that the NPP is not afraid to face the electorate but pointed out there are over one million potential voters who have attained the age of 18 since last year.

These, he said, have a right to be registered and the EC should register them because it has a mandate to conduct elections in December, even in the midst of the Coronavirus pandemic.

According to him, the NPP does not need an election to be rigged in its favour especially for a government that has put over 1.3 million children in school, restored industry and creating jobs for the people, and put 100,000 unemployed graduates to work among many others.

The President, he stated, has continued to show leadership and commitment to the welfare of ordinary Ghanaians.

“This gives us confidence that the Ghanaian people will recognize his leadership and performance and allow the party that knows how to deliver to continue,” he added.

He stressed that the NPP intends to fight and win in December based on its performance and not looking to the EC and the NIA to rig the election in its favour.