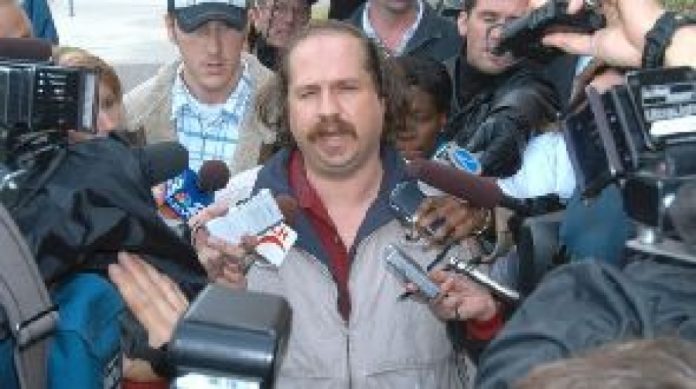 The body of American Kirk Jones was found 12 miles (19km) downriver weeks after the ball was found empty and spinning at the bottom of the falls.

In 2003 he suffered only cuts and bruises after plunging over the falls.

Mr Jones, 53, said afterwards that he would never try such a thing again.

New York State Park Police told the Syracuse Post-Standard that Mr Jones’s body had been found on 2 June in the Niagara River near the village of Youngstown at the mouth of Lake Ontario.

Det Sgt Brian Nisbet told the newspaper it was believed Mr Jones had tried to go over the falls in a large inflatable ball on 19 April.

The ball was recovered, empty, by the Maid of the Mist boat near the foot of the falls.

In 2003 Mr Jones was fined by a Canadian court for performing an illegal stunt and banned from the country.

Police confirmed it was the same man who had survived the falls 14 years previously.

Although his family said he had jumped as a daredevil act, Mr Jones later said he had been trying to kill himself.

He told reporters afterwards that he felt “very happy to be alive”.

“I understand what I did was wrong,” he said at the time. “You will never see an action in Niagara waters with my name written on it again.”
Mr Jones lived in Canton, Michigan, at the time but his most recent address was reported to be Spring Hill, Florida.

In an interview with ABC television he described going over the falls and being “sucked inside… the curtain of the falls and enveloped in it”.

He said he remembered spiralling at great speed with “unbelievable” pressure on his head and then feeling pain as he hit a slab of granite at the bottom.

He said he briefly lost consciousness but came to under water, swam to the surface and took his first breath.