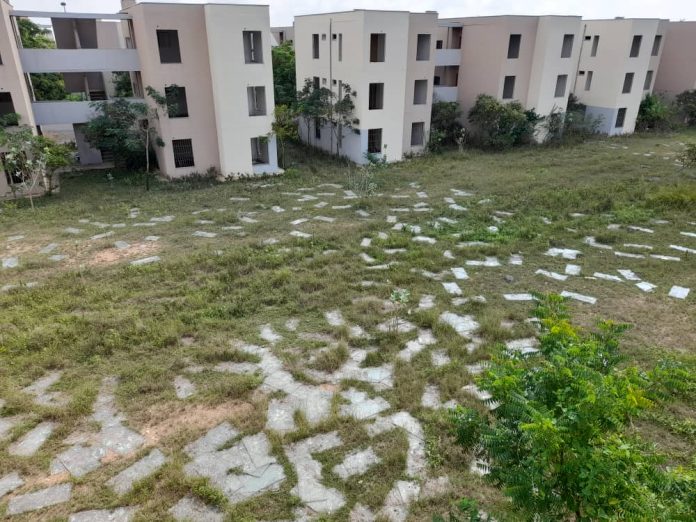 The Minority in Parliament has issued a terse warning to any developer considering taking up a proposal by the government to buy the Saglemi Housing Project.

According to Caucus, such investment will be in futility because when the National Democratic Congress (NDC) assumes the governance of the country in 2025, it will reclaim the project and return it to Ghanaian workers for whom the project was initiated.

This follows assertions by the Minister for Works and Housing, Mr. Francis Asensyo-Boakye that the government is considering selling the project to a private developer because it is a failure.

According to the Caucus, Ghanaians must see the level of vandalism and deterioration that the New Patriotic Party (NPP) government has allowed the project to undergo since it assumed power in 2017.

The site has been overrun with weeds with some growing in the cracks that have developed on some of the streets.

The electrical cables, sockets, glass windows, burglar proofs, doors, and other electrical gadgets and fittings have been removed and carted away or thrown haphazardly in the rooms and outside.

Ranking Member of the Committee, Hon. Vincent Oppong Asamoah expressed shock at the destruction and thievery that has gone on at the project site and stressed the Minority will resist any attempt to sell the project.

He argued that for six years the Akufo-Addo government allowed the site to be vandalized and ransacked so the deterioration will form the excuse to sell it cheaply to cronies.

The Ranking argued that the NDC in 2009 did not abandon the affordable housing project it inherited from the Kufuor government but rather transferred it to SSNIT, which completed and sold it to Ghanaian workers.

“We thought this government will take a cue from the NDC government and complete the project and make the Houses affordable to workers.”

“Government is complaining about budgetary constraints and that it does not have money though it has borrowed more than GH¢400 billion Cedis. Ghanaians will not be angry if this government borrowed money to complete this project on its own,” he stated.

A member of the Committee and MP for Awutu Senya West, Gizella Akushika Tetteh-Agbotui, marveled at the destruction and the fittings that have been stolen and expressed disappointment only five police officers have been tasked to patrol the estate.

She argued there is a good intention for the project and stressed the Dawa Industrial area is close by and Saglemi could provide the needed housing for workers of that industrial zone had it been completed.

She said, “On the other hand, the military and other security agencies could have benefited from the project so if this has been left to deteriorate, it is a matter we should be asking very serious questions of this government.”

“I’m disappointed and as an architect myself, it breaks my heart to see so much waste. The houses were well built and despite the years gone by, there are no cracks in the walls and the painting still looks good.”

She urged Ghanaians to resist the government’s attempt to dispose of the property, particularly at a price being quoted by the Minister.

MP for Nkoranza South, Emmanuel Kwadwo Agyekum, who took samples of the destroyed glass windows, electrical sockets, and other materials as evidence argued the level of destruction appeared to have been deliberate to run the place down.

He argued the Saglemi estate is more organized than many of the communities because none of the current residential areas have double-lane roads with well-built sewage and drainage systems.

Hon. Kwadwo Agyekum stressed the destruction could only have been carried out by professionals whose motive is only to destroy buildings and bring the property’s value down.