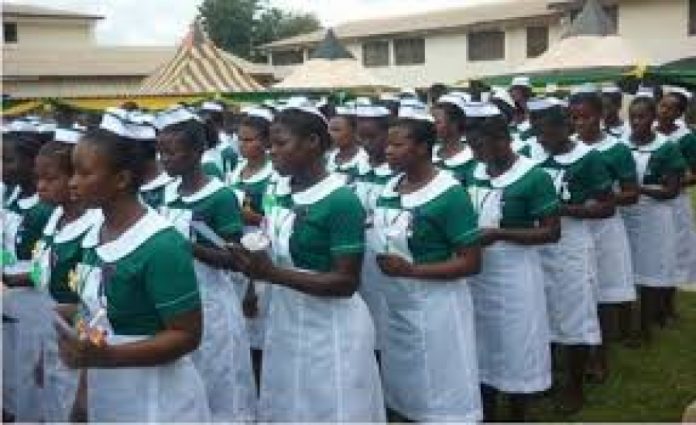 These psychiatric nurses, general nurses, and midwives, have been unemployed since completing their national service in August 2016.

These psychiatric nurses, general nurses, and midwives, have been unemployed since completing their national service in August 2016.

It will be recalled that scores of them spent two nights at the Ministry of Health to mount pressure on the government to fast-track their postings.

The spokesperson for the nurses, Tina Mireku, said that the Ministry had cleared them Thursday evening to get them employed.

“A meeting just ended with the minister, the Executive Director of the Ministry of Health, and other stakeholders and our clearance has been released – a total of 4832 nurses. On the clearance, it has been stated that we are to start work 1 July,” she said.

“Aside whatever happened, although the minister was not happy with the demonstration, that is the picketing we did…we also told him we did that out of frustration because staying home for nine months jobless wasn’t easy for us. So we want to say a big thank you to the Ministry of Health, all stakeholders that were involved in our posting and then the media… So we are looking forward to the Ministry to give us our various stations where on the 1st of July we will go and begin our work as professional nurses in the country,” she told Accra-based Class FM.

Meanwhile, some nurses in Ghana are against moves by the government to revoke the bonding arrangement of nurses.

The Minister of Health Kwaku Agyemang Manu on Thursday described as irrelevant the government bonding of nurses.

“We have several nursing training schools – some private ones have been training nurses for us…they pay their own school fees. So the value of bonding doesn’t seem to be real now,” he told Accra-based Citi FM.

His comments follow a statement by the Ministry that starting from 2017/2018 academic year, new entrant trainee nurses will not be mandated to serve a bond after completion of their training in government funded health institutions.

But several of the nurses have told Pulse.com.gh that stopping the bonding arrangement would not be ideal for health service delivery in the country.