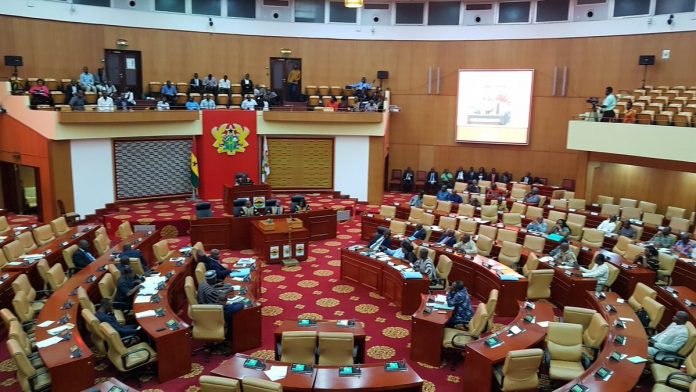 Parliament on Friday observed a one-minute silence to mourn the passing of a member for Mfantseman Constituency, Hon. Ekow Quansah Hayford, who was murdered by unknown assailants last Thursday night.

The MP was reportedly shot on his campaign trail by armed robbers on the Abeadze Dominase – Abeadze Daudzi – Mankessim Road when he identified himself as a lawmaker during a robbery.

According to reports, the robbers after discovering he was an MP, accused him of the problems in Ghana and shot him in cold blood.

A release from Public Affairs expressed Parliament’s shock and extreme sadness over the gruesome murder of the first time MP who served on the Judiciary and the Defence and Interior Committee.

It described the late member as a quiet, hardworking man, who did his job diligently with very little fuss.

“The Speaker and Members, while mourning the loss of their colleague, have expressed the hope for expedited action to find and bring the perpetrators of this heinous crime to book.”

“Parliament expresses deep condolences to his wife and children, family and friends, the Mfantseman Constituency and the entire nation,” part of the release stated.

At the plenary meeting on Friday, MPs expressed their sympathies and condolences to the wife and children and the entire bereaved family and indicated the death is a loss to the entire country.

2nd Deputy Majority Whip and MP for Trobu, Moses Anim, remarked that MPs are not owned by their families or by Parliament alone but are owned by the state of Ghana.

He argued that for this reason, members need to be provided personal police security just like Ministers of State and Chief Executives of Municipal, Metropolitan, and Districts.

He prayed to God to continue giving MPs protection and the state to augment the safety of members by assigning them personal police escorts.

Minority leader, Haruna Iddrisu, lamented that the murder of Hon. Hayford follows that of J.B Danquah-Adu who was killed last February, and whose assailants have not yet been arrested and punished.

He disclosed that some three members narrowly escaped death not long ago, which indicates that imminent threat to the life of MPs is real, and demanded the elevation of personal protection for all members.

He described the slain colleague as a gentle MP who always sat at the back with a quiet smile and stressed to lose him in such a manner is unacceptable.

Speaker Aaron Mike Oquaye described the late MP as an affable character, regular in the house, and who made useful contributions.

Ekow Hayford, he said, would be sorely missed particularly considering the manner in which he lost his life.

He extended condolences and sympathies of the House to the entire family, wife, and children, to his constituents as a whole, and to the members of the House who are also distressed by this death.