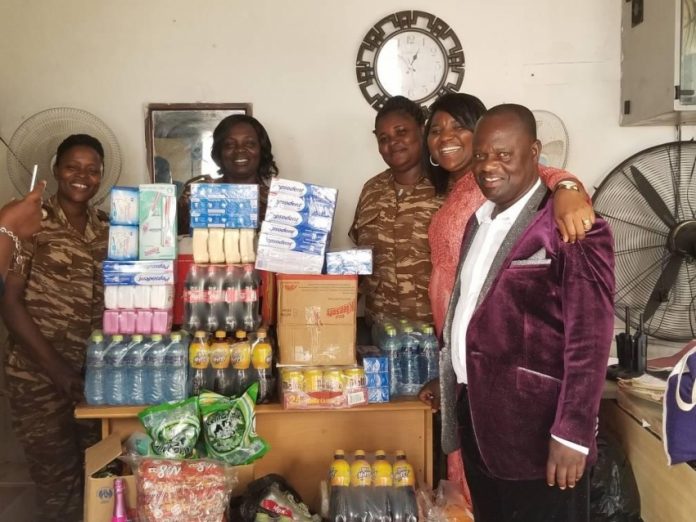 Mrs. Owusu-Akyew, popularly called Obaapa Vic or Aunty Vic, made the donation and dine with the female prisoners to show her love and encourage them to have faith in the Lord and for they are not forgotten by Him if even the outside world has forgotten them.
Counseling them, Obaapa Vic said the situation they find themselves in can happen to anybody so they need to be showed with love and care. And as woman who have passion for her colleague women, she finds it appropriate to visit and celebrate her birthday with them, instead of celebrating it somewhere else.

It was merry making and joy at the Prisons as the inmates hope were raised that they are not outcast and there are certain people who think about their situation and welfare as they languish in the prisons.
Aunty Vic, who was accompanied by her husband, Mr. Ben Owusu-Akyew, her children and some friends, advised the female inmates not to be discouraged because they will come out after their sentences and still be useful to the society and the country as whole.
The female prisoners also were much grateful to the Women’s Organizer who didn’t look down upon them, but found them worthy and also among the society who can be reformed to help in many ways to build better place for others.

They thanked and were very much appreciative with the visit and the feast organized for them by Aunty Vic on her birthday.
The prisoners also called the government to turn to them and revisit the sentences imposed on them, some think the system has not been fair to them.
They also called on the public to patronize their services which include dressmaking, hairdressing, beads and bag making, beads designed sandals, etc.