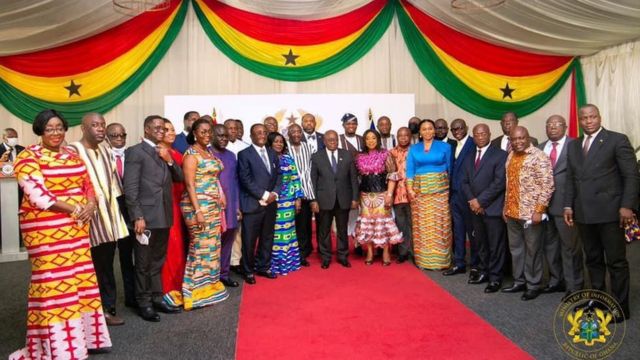 President Nana Addo Dankwa Akufo-Addo has sworn into office 28 ministers-designate approved by Parliament, charging them to provide leadership that would advance the progress of the nation and raise the living standards of the people.

Addressing the ministers, on Friday, at the Jubilee House, after administering the oaths of Allegiance, Office and Secrecy, and handing them their instruments of Appointment, the President told them that the entire nation followed their vetting process keenly, and had judged their capacity to serve in government.

“I am confident that together we will work to realise the vision of the mandate given to me by the Ghanaian people,” he stated.

He told the ministers that the oaths they had sworn: “is a heavy responsibility, especially since the Ghanaian people have in clear and emphatic terms demanded we protect our progress and transform Ghana for all”.

The President urged them to at all times uphold the interest of the Republic, the Constitution and the citizenry and to dedicate themselves to the promotion of the general well-being of the people.

He reminded the ministers that in his first term in office, the country made tremendous progress and that the next four years should seal the accomplishments.

The President explained: “In the last four years, we have had the opportunity to translate promises into concrete programmes. We were for three consecutive years, prior to Covid-19, one of the fastest-growing economies in the world, with a GDP growth rate averaging seven per cent per annum. We have become the largest recipient of Foreign Direct Investment in West Africa. We have become a net exporter of food.

“We have started adding value to our raw materials. We have strengthened the accountability organs of the state to enhance the fight against corruption. We have revived the National Health Insurance Scheme to facilitate affordable healthcare for ordinary people and all our children have been guaranteed a minimum of senior high school education. Above all, we have committed ourselves to the rapid industrialisation, modernisation and transformation of the economy.

“Indeed, we are in the process of putting this nation onto the path of sustainable progress and prosperity. Satisfied with this, the Ghanaian people have given us four more years to do more for them… So as you assume your roles in government, I urge you to provide leadership that would ensure that the work on which we have embarked benefits the progress of opur nation and help raise the living standards of our people.

“That is why we are here and that is why the Ghanaian people voted for us. I am assured that the various backgrounds and experiences of each of you will bring value to the governance of our nation and enable us to deliver on the commitments of our Manifesto.”

President Akufo-Addo urged the ministers to seek broad consensus in the implementation of their decisions because of the changing nature of the political environment.

“It is important that as we strive to provide good governance for our people that we remember at all times the changing nature of the political environment in which we are now operating,” he said.

“The vote of December 7, has resulted in a virtual tie in the representation of the two major parties in Parliament, which means, that we are obliged to seek broad consensus in the manner in which we implement our decisions.

“The Ghanaian people have placed their hope for a brighter future in us. I am looking forward eagerly to working with you so we can together realise their hopes and fulfil the dreams of the founders of our nation to build under God, a democratic, free, prosperous and united nation.”

He expressed gratitude to Parliament for the expeditious and thorough manner the vetting of the ministers were carried out, saying, “It is a concrete manifestation of the positive cooperation between the Executive and the Legislature, that I hope would characterise our relations in the next four years.”

The Finance Minister-designate Ken Ofori Attah, who is among the nominees the President sent to Parliament, could not appear before the Appointments Committee because he is in the United States on medical grounds.