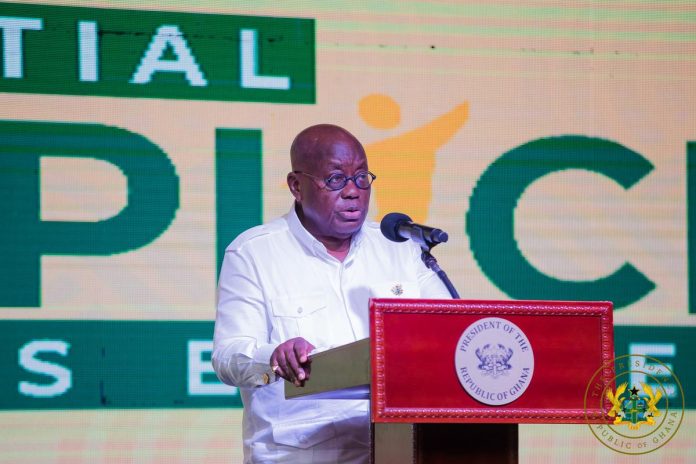 The Pitch Series, being executed under the auspices of the Ministry of Tourism and Culture and coordinated by the National Film Authority is expected to create a vibrant market place to develop, nurture and close film deals in the global film ecosystem, and make the country a film and tourism hub.

Launching the project on Wednesday 28th April 2021 in Accra, President Akufo-Addo noted that Ghana had abundant forts and castles, national parks, historic palaces, wildlife and festivals that could be filmed and marketed for tourist purposes.

He reiterated the importance of culture and the arts to the future Development of the country, adding that Ghana was capable of building a profitable and viable film industry like its counterpart in Americas and the Federal Republic of Nigeria.

The President noted further that the consistent favourable rankings of Ghana by the World Economic Forum Global Competitive Report as politically stable, with a safe and secure environment, unique and better tourist assets and infrastructure, should make the country a preferable film and tourism hub, which should be leveraged by Ghanaian film producers.”

“We are, indeed, the safest country in West Africa, and the third most peaceful country on the continent. This enviable position has great marketing and promotional ramifications for the development and sustainability of the Ghanaian film industry. It is for these reasons that we have gathered this afternoon to launch the first-ever Presidential Film Pitch Series, which is also the first of its kind in Africa.”

Citing the American film industry, which supports some twenty-two million jobs and with a staggering wage bill of one 137 billion dollars, and Nigeria’s Nollywood which contributes some six hundred million dollars to that country’s gross domestic product and create over a million jobs” the President said government will continue to initiate policies and programmes to help make the Ghanaian film sector competitive and viable.

He noted that the $25 million investment in the industry would go a long way to strengthen the local film ecosystem, with some 6,000 jobs set to be created as a result.

The President announced a 45 million Euros facility for the National Film and Television Institute (NAFTI), the oldest film and television training school in West Africa, for its retooling into a world-class training facility, to enable it to provide the needed training for players in the industry.

He also announced that he had given assent to the Creative Arts Industry Act which was passed by the Seventh Parliament during his first term in office, indicating that the Act will help create an “enabling environment for the Ghanaian film sector and the creative arts sector in general, to contribute effectively to the nation’s growth”.

The Presidential Film Pitch series is a project aimed at creating the platform for Ghanaian filmmakers within the Ghanaian film ecosystem to engage investors, broadcasters, distributors, sponsors, and platforms around the world for potential collaboration, sponsorships, investment, sales and advertising opportunities,

The platform is expected to lead to the production of some 200 films and generate over 40,000 jobs annually. Twenty-five entries out of 100 documentaries, feature films, short films, series, games, and film infrastructure have been shortlisted for the pitch.

The 25 entries will close deals that will lead to the production of their projects.

Akuapem Poloo to serve 60 days in jail with good behaviour