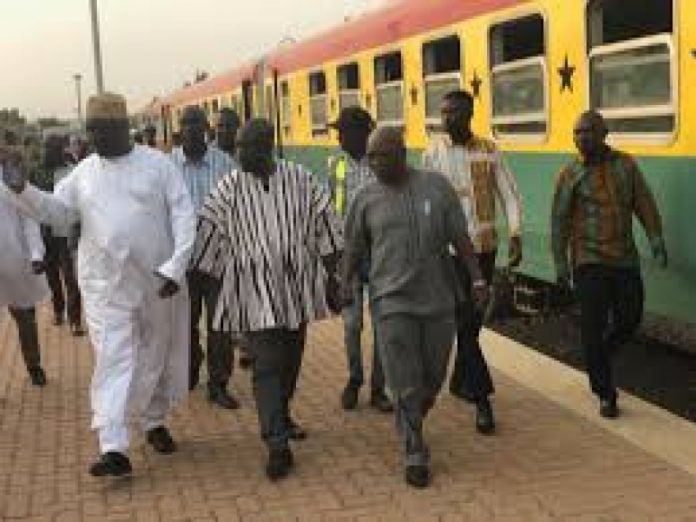 Drawing parallels between the success of pre-independence Ghana and the railway sector of the time, Mr. Ghartey said if the country improves on its current railway network, economic development will be boosted.

“The railway sector is the one sector which will transform this economy,” Mr Ghartey said Tuesday at the relaunch of the Accra-Tema Train Service in Accra.

“I am convinced beyond reasonable doubt, that in the same way that the railways when it was introduced in 1898 in Sekondi transformed the economy of the then Gold Coast and by the late 1920s and 1930s because of the railways, the cocoa farmers had increased their production so much that Ghana or the then Gold Coast had become the world’s largest producer of cocoa and also had become the richest British colony.

“In the same way, if we are serious about Railway development within 20-30 years time this economy of ours will transform from a middle-income country into a first world country”.

The Minister before his address was joined by hundreds including the Minister of Information, Kwadwo Oppong Nkrumah, the MD of the Ghana Railway Company Limited, Mr. John Essel and Black Stars coach Kwasi Appiah aboard a test-run of the Accra-Tema Train shuttle.

The shuttle is expected to offer free rides for the next two weeks before it begins commercial operations at a cost of GHC 5 per passenger.

The shuttle has a diesel multiple unit (DMU) train which seats 360 persons with ample room for tens more to stand on a trip expected to last one hour thirty minutes (1hr30mins).

It is powered by onboard diesel engines and requires no separate locomotive, as the engines are incorporated into one or more of the carriages.

It will make return trips at 5.40pm, from the Accra Central Railway Station to Tema. The train will make stops at Odaw Station (Circle), Achimota Station, Batchona Station, Asoprochana Station, Tema before stopping at the Community 1 Station at 7:22 pm.

Aboard the Accra-Tema shuttle, GraphicOnline observed that some petty traders were seated with their wares perilously close to the train track.

It will be recalled that the activities of the encroachers disrupted the scheduled reintroduction of passenger rail services on January 8.

The trespassers took advantage of the Christmas and New Year break and returned to the railway reservation (buffer zone), after they had been cleared off the rail lines about five times.

Some of the areas where people are living and trading very close to the railway line and level crossings are Circle, Avenor, the Graphic Road, Achimota, the Nyaho Clinic area and Dzorwulu.