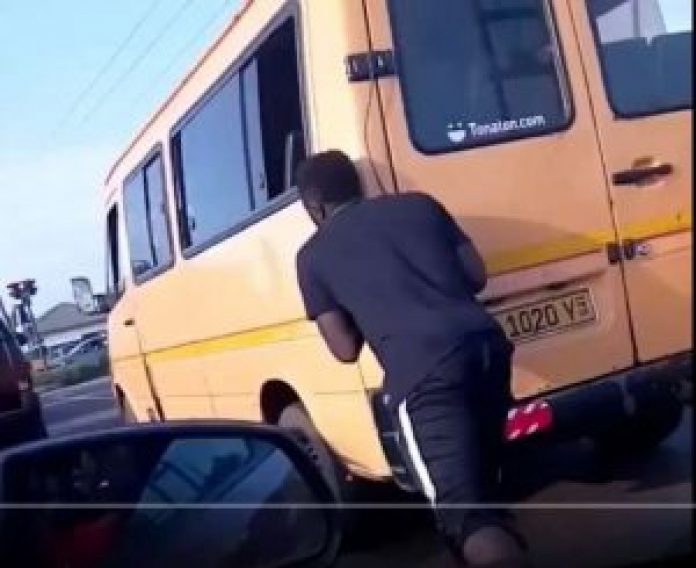 The broken down vehicle in Pantang was causing a massive traffic pile up when the former AC Milan star jumped out of his SUV to help get the bus off the road to make way for smooth travel for commuters.

The footballer, who had gained bad publicity earlier in the week for alleged physical attack on a referee, helped to push a ‘trotro’ that had broken down at the side of the road.

Muntari was seen in a casual training shorts and a black t-shirt joining the ‘mate’ of the trotro or bus conductor as they tried to move the vehicle away from the road so not inconvenience other road users.

This kind gesture has won back some fans for Muntari who was slammed this week for his attack on the referee John Terry in a local friendly match in Accra.

Muntari’s help then brings to mind the controversial towing levy that government has planned to implement on all road users.

The policy is meant to be government’s solution to clearing the country’s streets of broken-down hazardous vehicles.

However, several national stakeholders have criticized government for introducing this policy.

According to them, the levy is not the solution to the problem of broken down roads as there are already policies similar to the levy.

These stakeholders believe government should focus on enforcing the road regulations rather than charge citizens to decongest the roads.