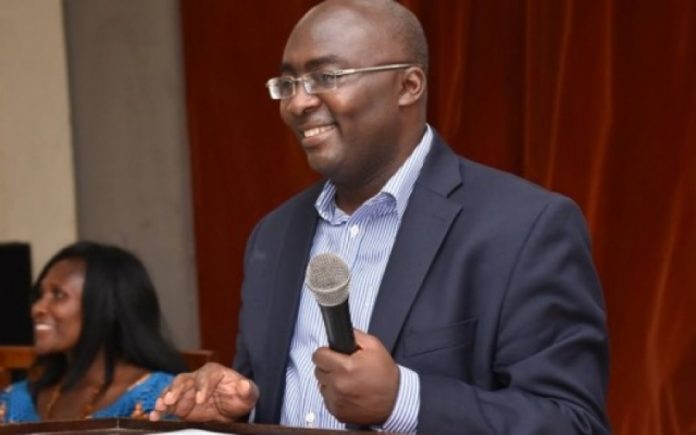 “This is just the beginning,” he said, attracting thunderous applause from the audience.

Addressing delegates at the 25th Annual National Delegates Conference of the New Patriotic Party (NPP) at the University of Cape Coast, Vice President Bawumia said they were elected to fix the economic challenges of the country and, so far, the Government had delivered by putting the right polices in place, which had put the economy on the right footing.

He said the Government promised to stabilise the macro economy and progress was being made by reducing inflation from 15 per cent in 2016 to nine per cent currently, adding that it would reduce the debt to Gross Domestic Product (GDP) ratio from 9.3 to 6.3 per cent by the close of the year.

He said the period of reckless borrowing was over and would ensure responsible borrowing to ensure prosperity for all Ghanaians.

Vice President Bawumia said, for the first time, the Government was current on its statutory obligations and settled some arrears of the National Health Insurance Scheme.

He said due to the prudent economic management and policies by the President Nana Addo Dankwa Akufo-Addo led Government, it was on course in creating jobs for the teeming unemployed youth.

Commenting on the Economic Management Team, Dr Bawumia said the NPP had competent men and women that could deliver on its promises and mentioned Mr Yaw Osafo Maafo, the Senior Minister, Mr Alan Kwadwo Kyerematen, the Minister of Trade and Industry, Mr Ken Ofori-Atta, the Minister of Finance, among others who had the expertise and competencies to turn the fortunes of the country to ensure prosperity for all.

He said:”Our mission is to strengthen the economy and build a Ghana that works”.

The Vice President said the economic challenges inherited were a reality and that they had the competence to deliver adding; “President Akufo-Addo has a vision that can be transformed into reality.”

He said this year’s Budget abolished some nuisance taxes including the excise duty on petroleum, levies imposed on Kayayie, Special Import levy, 17.5 VAT/NHIS on domestic airline tickets, while the interest rate was relatively stable with a year to date depreciation of 3.7 per cent against the dollar.

Dr Bawumia said the fiscal consolidation had been restored with the fiscal deficit on course to be reduced from 9.3 per cent of GDP in 2016 to 6.3 by the end of the year.

Dr Bawumia noted that Ghana’s debt stock were increased from 9.5 billion in 2008 to GH¢122 billion in 2016 and that the debt to GDP ratio from 32 per cent to 73.1 per cent was over in view of debt sustainability measures instituted by the NPP Government.