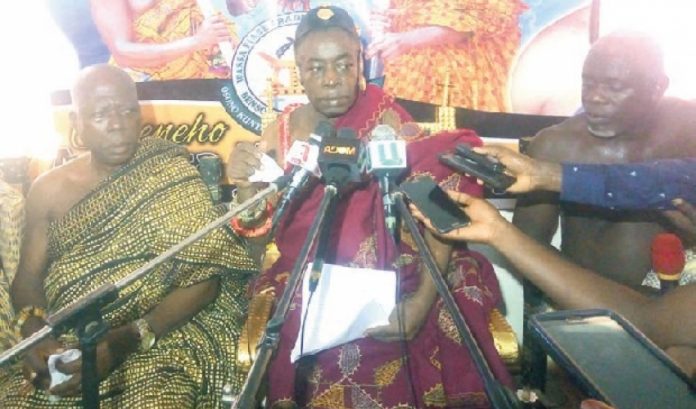 Consequently, he gave a one-month ultimatum to the relevant authorities to reinstate him.

Addressing the media during a durbar at Benso in the Western Region recently, he pointed out that a minor chieftaincy dispute in the area led to his withdrawal from the National House of Chiefs.

According to him, that led to a legal tussle but the Supreme Court declared him the legitimate head of the Fiase Traditional Council.

Odeneho Akrofa Krukoko II mentioned that the machinations of the opposition traditional rulers had hampered the development of the area.

He called on government to revive the Bonsa Tyre and Aboso Glass factories to provide job opportunities to the youth and also construct health facilities and police station in the area.

“I am appealing to Nana Addo, l know he is a listening president to as soon as possible reinstate me to the National House of Chiefs.

“My rights have been violated for a long time; it’s high time the Chieftaincy Ministry took a critical look at what is happening in Wassa.”

The Wassa Fiase Manhene, who rubbished rumours about his death, was installed in June 1994.

He added that “my name was gazetted as Paramount Chief of Wassa in 1996. I demand reinstatement to the National House of Chiefs as soon as practicable.

“Sadly, some of these so-called divisional chiefs who are responsible for the confusion don’t have the backing of the Black Stool that symbolizes that they are true chiefs of their towns and villages.”