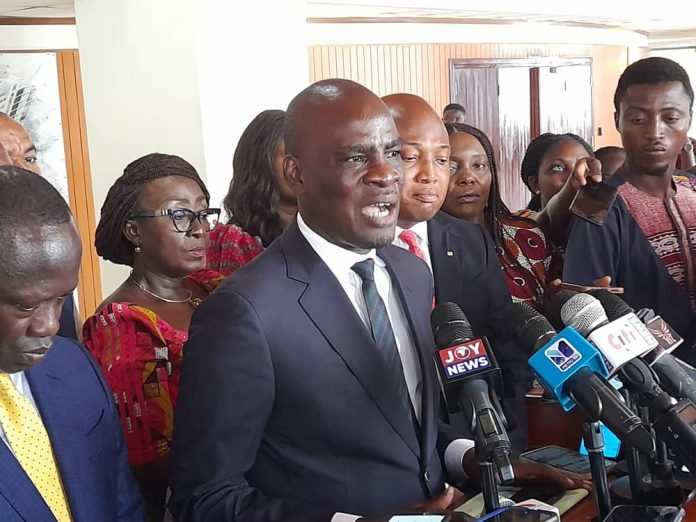 The Minority in Parliament has stated it will continue to challenge the proposed Public Elections (Registration of Voters Instrument (C.I) that the Electoral Commission (EC) is planning to present to Parliament.

The C.I. is seeking to make the Ghana Card the only valid document for the identification and registration of Ghanaians for the impending 2024 general elections.

The Minority leader on Tuesday, November 1 withdrew a Petition advertised in the Order Paper on the proposed C.I. but later indicated to the media it has not been withdrawn indefinitely as published in the media.

According to him, the only reason why it was withdrawn is to afford him the opportunity to read the petition to the House during the presentation before the Speaker will refer it to a Committee instead of simply bowing.

The Petitioned as advertised in the Order Paper reads:

Petition of the National Democratic Congress (NDC) that (a) The proposed Public Elections (Registration of Voters) Instrument (C.L.) should not be laid until the backlog of Ghana Cards, which the National Identification Authority has admitted to, has been cleared;

c) Any further action on the proposed C.I. by or in Parliament should be frozen until consultations have been initiated and concluded with the major stakeholders, especially the political parties, including the NDC, and civil society.

“There is no withdrawal of any petition. I only want to read the Petition. I just didn’t want to bow and say that it has been referred, no.”

“Procedurally, if you recall the Hon. Mahama Ayariga’s petition, I want to follow the same roadmap so we will fully come with it as a Minority,” he added.

The Minority, he said, has a duty to preserve Ghana’s democracy and to protect and ensure the respect for fundamental human rights and freedoms as enshrined in Article 42 of the 1992 Constitution.

According to him, they are concerned the disparity and discrepancies in data between the National Identification Authority (NIA) and the Electoral Commission may give course to the enjoyment and upholding of the fundamental rights to vote.

He argued that the EC has data of over 17 million while the NIA has data of less than 17 million and yet the Commission is seeking to rely on the NIA data for the purposes of voter registration and elections.

He said, “In any case the biometric data that the EC spent over $80 or more to capture, what has happened to it? Why are you abandoning your data for NIA data?”

“The NIA data is subject to ministerial and presidential directives and control but the EC is not by virtue of Articles 45 and 46 of the Constitution. We know an Electoral Commission, an independent one, we may not be satisfied with their performance but at least we respect their independence as well. The NIA is not even an institution contemplated to have independence.”

The Petition, he said, is intended to enforce the respect for Article 45 (e) of the 1992 Constitution.

The Minority leader queried why the EC has not registered Ghanaians who have acquired 18 years into the Voters Register and stressed no legislation ties the Commission’s hand from proceeding with that. We see them wanting to repeal C.I 91 and C.I 126, which is needless and unnecessary. They have the mandate to do so and we hope they do so.”

He urged the EC to do further consultation with NDC and other political parties and Civil Society groups and stressed the Minority, by its petition, intends to preserve and protect rights guaranteed under Article 42, the right to vote.