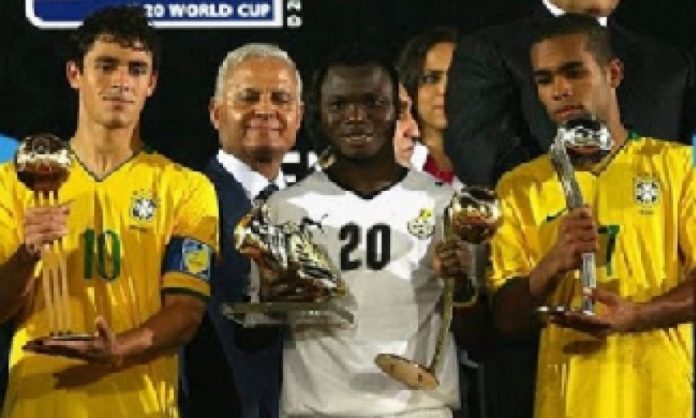 Dominic Adiyiah had blossomed at the 2009 U-20 World Cup, winning the Golden Shoe and Golden Boot awards with his eight goals at the said tournament. Adiyiah’s rise to prominence was quite short-lived, to say the least. Many expected the rising star to find life relatively easier than his peers from Ghana’s colts football but a decade after, it has been anything but.

The 29-year old has seen his career taken a downturn since 2010. He has played for 11 clubs in 10 years but is never seen in highly rated top-flight clubs. Settling for second division teams has become a norm for the former Fredrikstad star and the latest is Thai second-tier side Sisaket FC.

After standing shoulder to shoulder with the likes of Juventus ace Douglas Costa and Shakhtar Donetsk playmaker Alex Teixeira, Adiyiah may have thought the years succeeding his top moments in Egypt were to be full of success. Sady though, Adiyiah’s upward trajectory was cut short all too quickly. His move to AC Milan only months after helping Ghana to a first World Cup trophy ended farcically. A series of loan deals with a host of clubs including Reggina, Partizan Belgrade, Karsiyaka, Arsenal Kyiv and Swat Cat saw him score only 32 goals in 201 appearances.

Now at Sisaket, all hope for his upsurge must be all gone. Any form of a renaissance at this stage in his career is not expected and it has become clear over the years that Adiyiah’s career has faded into oblivion, never to be seen under the bright lights of the famous stadia in European football.