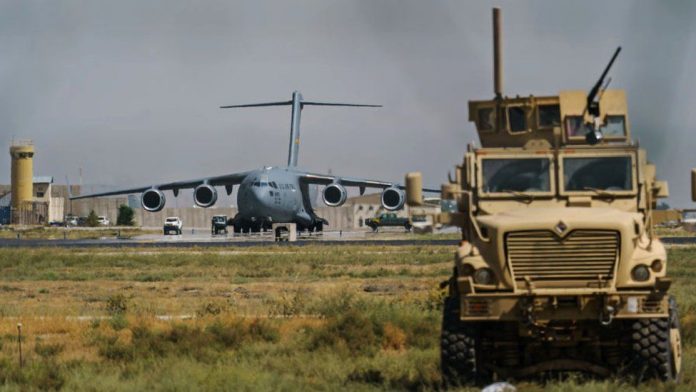 A US drone strike in the Afghan capital Kabul has prevented another deadly suicide attack at the airport, US military officials say.

The strike targeted a vehicle carrying at least one person associated with the Afghan branch of the Islamic State group, US Central Command said.

The US had warned of possible further attacks as evacuations wind down.

Despite this, it has said that it will keep evacuating Afghans from Kabul airport until “the last moment”.

A deadline for the evacuation mission of 31 August was agreed between the US and the Taliban, who now control most of the country.

The US will be the last to complete its mission, with all other countries having already concluded theirs.

The final flights returning British troops from Afghanistan have been arriving in the UK on Sunday.

The US says it has facilitated the evacuation of more than 110,000 people from Kabul airport since 14 August – a day before the Taliban took control of the capital.

The BBC’s Lyse Doucet, in Kabul, says she and her colleagues are still receiving urgent SOS messages from Afghans who feel threatened by the Taliban. They include musicians, university students and female politicians.

Many of them feel they cannot have the kind of future they had prepared for after two decades of international engagement, our correspondent says – and many say the Taliban are stopping them from leaving.

On Sunday, Capt Bill Urban of Central Command said the US had carried out a targeted drone strike aimed at “eliminating an imminent” threat to Kabul airport.

“We are confident we successfully hit the target,” he said, adding: “Secondary explosions from the vehicle indicated the presence of a substantial amount of explosive material.”

His comments came after multiple reports of a loud explosion heard near Kabul airport. Some images posted on social media showed black clouds of smoke rising into the air above buildings.

US intelligence officials earlier said they had received “specific, credible” threats against the airport, and that the military would continue to carry out targeted strikes where necessary.

The US advised people to stay away from the area, despite time running out for anyone still trying to access evacuation flights.

Separately on Sunday, Kabul police said a child had been killed in a rocket strike on a house near the airport. Details about the strike are unclear.

A bomb attack at the airport last Thursday killed as many as 170 people, including 13 US troops.

A regional affiliate of the Islamic State group, IS-K, said it was behind Thursday’s bombing.

In retaliation, the US carried out a drone strike on eastern Afghanistan late on Friday, saying it had killed two “high-profile” IS-K members.

US President Joe Biden on Sunday met the families of the 13 American personnel killed in Thursday’s Kabul airport attack.

Mr Biden took part in a ceremony to honour the victims at Dover Air Force base in Delaware.

US President Joe Biden salutes during the dignified transfer of the remains of US Military service members who were killed by a suicide bombing at the Hamid Karzai International Airport, at Dover Air Force Base in Dover, Delaware

In addition to the US personnel killed in the IS-K bomb attack, dozens of Afghans who were queuing at the airport in the hope of leaving the country also died. Two British nationals and the child of a British national were among the dead.

Most of IS-K’s several thousand extremists are believed to be in hiding in the Nangarhar province of Afghanistan, east of Kabul.