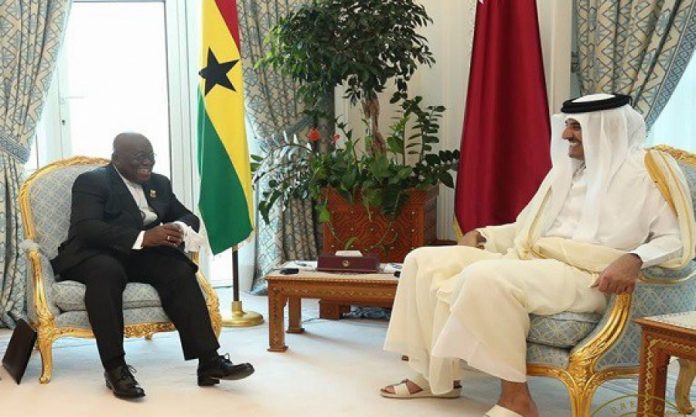 The discussions between the two leaders centered on energy, infrastructural development, railways and roads among others.

The Emir who is set to visit Ghana from between December 27 and 29, 2017, told President Akufo-Addo that he was keen on seeing Ghanaian companies invest in Qatar.

To this end, he said was ready to meet with the Ghanaian business community during his visit to the Ghana in December.

Sheikh Tamim bin Hamad Al Thani indicated that Qatar was desirous of forging strong partnerships and relations with countries such as Ghana, countries that are governed in accordance with the rule of law, respect for individual liberties and human rights, and the principles of democratic accountability.

The Emir of Qatar stressed on the need to rekindle the ancient ties between Africa and the Gulf Region, which has weakened in the course of the last 60 to 70 years.

On his part, President Akufo-Addo was grateful for the warm reception and hospitality accorded him and his delegation since his arrival in Qatar.

President Akufo-Addo said Ghana was willing to learn from Qatar how it has exploited its gas resources for the development of the country and the progress of its people.

He was hopeful that Ghana would have an Ambassador to Qatar, and would have established an embassy in Qatar prior to the visit of the Emir.