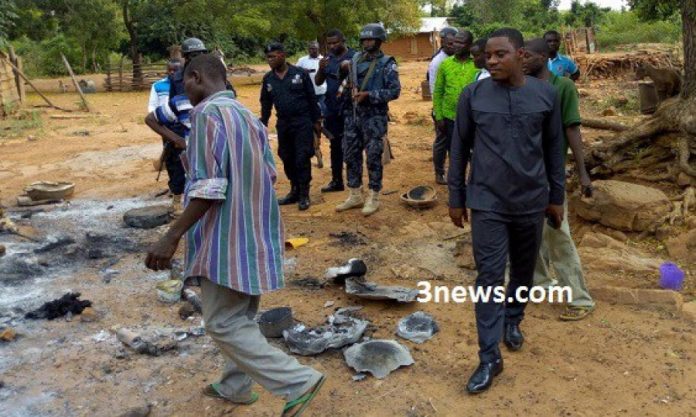 Residents of the community and those other communities were at a meeting Wednesday to find best ways getting pupils in the area to return to school when the herdsmen allegedly stormed Asumesu No2 to burn down their homes.

Most of the people in the area fled their homes following recent attacks that led to the death of 10 people.

Basic schools in the area have since the incident about a month ago, closed down as teachers fled for fear of their lives. Female teachers had sought transfers from authorities.

But a Police intervention caused some residents who have farmlands to their homes. The Asamblyman of Hweehwee, Solomon Aboagye on Wednesday invited the people of Oboyan 1, Oboyan 2, Aseseaso, Sakakrom, Dweabeaso, Aboam, Bebua, Yaw Tenkorang, Atarikrom, Atta Ne Atta, and Oboarakyire to a meeting to strategise on how to get schools to reopen and for parents to release their children to go to school. Yaw Tenkorang is the only community that has had its schools reopened.

The Assemblyman was said to have assured residents of their safety and security following similar assurance by the Police.

He told 3News that before residents could return home, information came that houses have been burnt at Asumesu No2, allegedly by some nomadic herdsmen who have been on collision with residents.

Currently, some residents of Asumesu No2 are seeking refuge at a World Vision facility at Hweehwee, while others are at Nkawkaw and Abetifi. Meanwhile, the District Chief Executive for the area and the Police have visited Asemesu No2 to assess the situation and see how to help the affected residents.