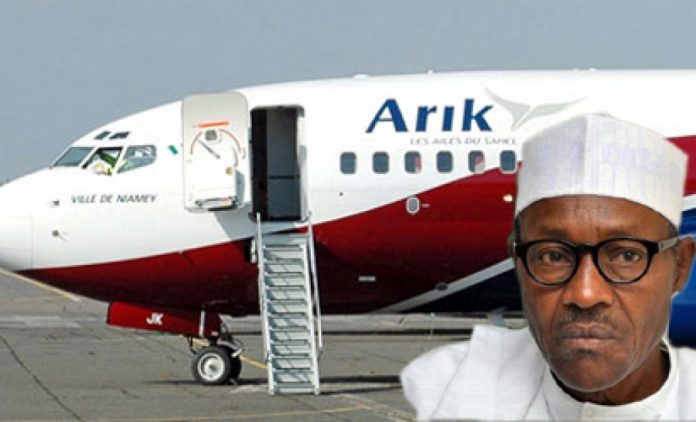 According to AMCON, the situation is so bad that only nine aircraft of the 30 in Arik Air’s fleet is operational. It said the remaining 21 aircraft had either been grounded or gone for C-check in Europe, among other challenges.

Powerful cabal in the Presidency was said to have decided to take advantage of President Muhammadu Buhari’s absence to hatch the plot as efforts to sell the idea of “take-over of ARIK” This is coming as industry sources alleged hidden agenda in Arik Air’s take-over, with the Senate planning to hold a public hearing on the issue. AMCON’s revelation was made public by the new management of Arik Air, headed by the Chief Executive Officer, Capt. Roy Ukpebo Ilegbodu, under the receivership of Mr. Oluseye Opasanya, SAN.

The airline was, last Thursday, taken over by the Federal Government, under the auspices of AMCON, as a result of a debt profile of over N300 billion. AMCON, in a statement, yesterday, said: “The Asset Management Corporation of Nigeria, AMCON, has discovered deep rooted rot at Arik Airlines, which would require over N10 billion to fix before the largest local carrier would resume full and uninterrupted flight operations to its regular routes across the country and beyond.

“The situation is so bad that only nine aircraft out of the 30 in the fleet of the airline is operational. 21 of them have either been grounded, gone for C-check in Europe among other forms of challenges. ‘’As if these problems are not enough, the airline does not have money to procure aviation fuel for the nine operational aircraft because no dealer wants to sell aviation fuel to Arik if it is not on cash-and-carry basis.

‘’This also calls for public understanding because flight schedules may be realigned based on the nine aircraft that are available, technically sound and ready for flight operation. “It was also discovered that Arik also owes its technical partners and also in perpetual default in its lease payments and insurance premium, leading to regular and embarrassing squabbles with different business partners, which account for why 21 aircraft are off the fleet for different reasons.

‘’All these problems, in addition to huge staff salaries, which have remained unpaid for 11 months; vendors that supply different items to Arik Airlines that are also owed, meant that Nigerians may have to tarry awhile to allow the new management clean up the huge mess at the airline before Arik would finally resume uninterrupted flight.” Capt. Ilegbodu assured at the weekend, that these issues, though daunting, would be gradually resolved to enable Arik Airlines, which carries about 55 per cent of the load in the country, recover the 21 aircraft. He said: “Once all the aircraft are back to the fleet, Arik Airlines would within the shortest possible time regain its pride of place as a leader among the comity of airlines in Nigeria.

‘’Having settled the insurance cover for the aircraft, which would have expired on February 12 and met with different trade creditors as well as aggrieved staff, Arik will return to full operational capacity within the shortest possible time frame.”

Meanwhile, the desperation of a powerful cabal in the Presidency to float a national airline by all means may have led to alleged hostile take-over of the privately owned Arik Air. With the suspended management of the company vowing to challenge the action in court, sources said AMCON’s action was to preempt a crucial meeting the suspended management of the airline was scheduled to have with Afreximbank in Cairo, Egypt, this week to unlock a massive capital injection to refinance its operations which had been hampered by forex crisis.

Citing the airline’s inability to service its debt portfolio and commitments to service providers, AMCON forcibly took over its operations with the help of truckloads of armed policemen, barely 24 hours after the Economic and Financial Crimes Commission, EFCC, invited the chairman of the suspended board, Sir Joseph Arumemi-Ikhide. Justifying its action, AMCON said it considered Arik Air too critical in the aviation sector to be allowed to go under.

The powerful cabal in the Presidency was said to have decided to take advantage of President Muhammadu Buhari’s absence to hatch the plot as efforts to sell the idea of “take-over of ARIK” in the past to form the nucleus of “the so-called national career” did not receive a positive response from him. The President reportedly said: “I am not interested in taking anybody’s business.”

A source privy to the multinational financial negotiations being pursued by the former management to recapitalise the airline, faulted official claims that the airline was on the brink of collapse before AMCON’s intervention, last week. Said the source, who is a top banker: “Contrary to the bogus claims that Arik Air was owing over N300 billion, I am aware that in the last reconciliation between the suspended management and AMCON, the figure agreed was in the neighbourhood of N90billion.

“For an airline valued independently at over $4 billion by a world renowned valuer like Deloitte of London, I do not think that the company could be regarded as a bad case with such debt profile. “Some powerful interests are just desperate to call a dog a bad name in order to hang it. The agenda is to bring together Arik Air and Aero to form what they call new national carrier and bring in Ethiopian Airways as technical partner.

‘’Can you imagine, going to bring Ethiopia to run a national carrier for Nigeria, the supposed Giant of Africa? If government could run an airline, Nigeria Airways would not have gone under. “The said N90 billion provided by AMCON was to buy back loan provided by Union Bank to acquire two brand new A340 Airbus aircraft being used for international haul by the company.

So, it is most unfair to accuse the promoters of Arik of mismanagement when everyone knows that the economy is in distress and even foreign airlines have had to downgrade their operations in the country due to the hostile environment. “If AMCON says the suspended management was incompetent, is it not ironic that the same AMCON a few hours later named the Deputy Managing Director of the same management it discredited as new CEO of Aero Contractor? “It is an insult on the intelligence of the Nigerian public.

If AMCON itself is a good business manager, how come Aero, which had nine aircraft when AMCON took it over five years ago now has only two aircraft in its fleet? “As a matter of fact, the suspended management was already scheduled to have a meeting with Afreximbank team in Cairo this week to finalize the negotiation of massive capital injection into Arik to enable it refinance its debt to AMCON.

“The AFREZIM’s cash was supposed to have come last year alongside additional funds from private placement that the old management wanted to do to raise more funds to reposition the company. But the massive devaluation of naira by the CBN upset all the plans as new financial outlays had to be done to reflect naira’s new value.

“Rather than crucify a local investor who is patriotic enough to go into aviation at a time the sector was in disarray and planes were virtually falling off the sky, I think the reasonable and fair thing to do is for government to support such individuals. “Look at what President Donald Trump did last week.

He called all the CEOs of American Airlines and said he was willing to do anything to assist them to compete favourably against the likes of Emirate and Qatar that are heavily subsidized by their countries. Here, we go for the jugulars of Nigerians who invest in Nigeria.”

Already, many aviation stakeholders consider AMCON’s action too high-handed, considering that the suspended management of Arik Air had helped to raise safety standards in the industry in the last decade, apart from facilitating Nigeria’s certification as Category One, thus opening the international routes for Nigeria’s privately owned airlines.

Only recently, Arik became the third airline after South African Airways and Ethiopian Airline to be certified in Africa by the influential Israeli secret service, MOSSAD, to fly directly to Tel Aviv. Worried by the negative reactions AMCON’s action has generated both locally and internationally, the Senate Committee on Aviation, it was gathered, has sent invitation to all the stakeholders for a public hearing, this week.